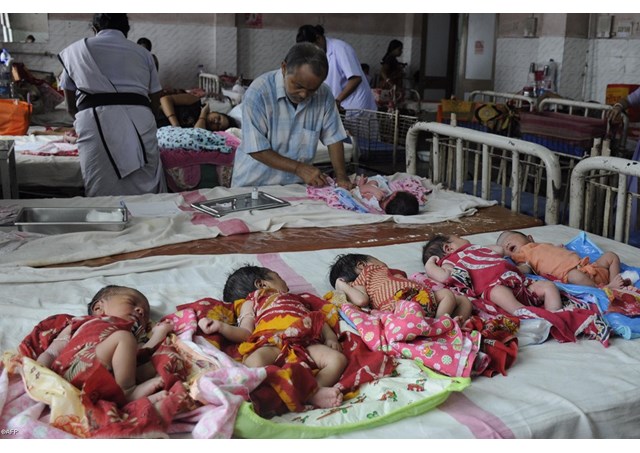 The population of India, which currently ranks as the world’s 2nd most populous country with 1.3 billion inhabitants, is expected to surpass China's 1.4 billion by 2024; and Nigeria, which ranks 7th, is expected to replace the United States as the 3rd most populous country by 2050, according to a new report by the United Nations published on Wednesday.

The current world population of nearly 7.6 billion will increase to 8.6 billion by 2030, 9.8 billion in 2050 and 11.2 billion in 2100, said the report titled, “World Population Prospects: The 2017 Revision.” Published by the Department of Economic and Social Affairs' Population Division, the study said the growth will be spurred by the relatively high levels of fertility in developing countries – despite an overall drop in the number of children people have around the globe.  Roughly 83 million people are added to the world's population every year and the upward trend is expected to continue even with a continuing decline in fertility rates, which have fallen steadily since the 1960s.

John Wilmoth, director of the Population Division, said that the report includes information on the populations of 233 countries or areas of the world.  `The population in Africa is notable for its rapid rate of growth, and it is anticipated that over half of global population growth between now and 2050 will take place in that region,'' he said at a news conference at the UN in New York, June 21.  “At the other extreme, it is expected that the population of Europe will, in fact, decline somewhat in the coming decades,'' he said

The U.N. agency forecasts that from now through 2050 half the world's population growth will be concentrated in just nine countries - India, Nigeria, Congo, Pakistan, Ethiopia, Tanzania, United States, Uganda and Indonesia. Those nations are listed in the order of their ``expected contribution to total growth,'' the report said.   During the same period, it added, the populations of 26 African countries are expected to at least double.

The report said fertility has been declining in nearly all regions in recent years.  Between 2010 and 2015, Wilmoth said, ``the world's women had 2 1/2 births per woman over a lifetime - but this number varies widely around the world.''  “Europe has the lowest fertility level, estimated at 1.6 births per woman in the most recent period, while Africa has the highest fertility, with around 4.7 births per woman,'' he said.  More and more countries now have fertility rates below the level of roughly 2.1 births per woman needed to replace the current generation, the report said. During the 2010-2015 period, fertility was below the replacement level in 83 countries comprising 46 percent of the world's population, it said.  The 10 most populous countries with low fertility levels are China, United States, Brazil, Russia, Japan, Vietnam, Germany, Iran, Thailand and United Kingdom, the report said.

In addition to slowing population growth, low fertility levels lead to an older population, the report noted. It forecasts that the number of people aged 60 or above will more than double from the current 962 million to 2.1 billion in 2050 and more than triple to 3.1 billion in 2100.  A quarter of Europe's population is already aged 60 or over, and that share is projected to reach 35 percent in 2050 then remain around that level for the rest of the century.

The report also noted the impacts of the flows of migrants and refugees between countries, in particular noting the impact of the Syrian refugee crisis and the estimated outflow of 4.2 million people in 2010-2015.  In terms of migration, “although international migration at or around current levels will be insufficient to compensate fully for the expected loss of population tied to low levels of fertility, especially in the European region, the movement of people between countries can help attenuate some of the adverse consequences of population ageing,” the authors of the report wrote.