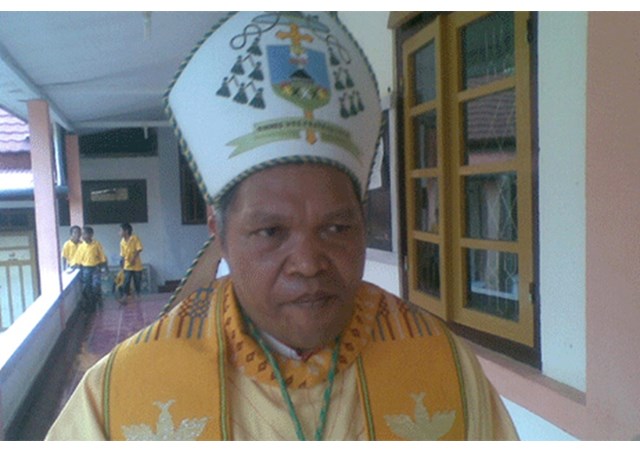 Nearly 70 of priests of Ruteng Diocese in eastern Indonesia have sought the mediation of the Vatican to help resolve a bitter dispute with their bishop, whom they accuse of misappropriating more than US$100,000 in church funds.

Representatives of the priests, accompanied by a bishops' conference official met Apostolic Nuncio Archbishop Antonio Guido Filipazzi on June 16, seeking his help for a complete overhaul and transparency from Bishop Hubertus Leteng regarding how things are run in the diocese.  The move comes after dozens of priests in the diocese on Catholic-majority Flores Island quit their posts in protest against their bishop.

Father Alfonsius Segar, one of the priests who met Arch. Filipazzi, told UCANEWS that the Holy See’s representative to Indonesia, has promised to help resolve the dispute.  "He will immediately take this issue up with the Vatican," Father Segar said.  The priest also said the nuncio will send someone to the diocese to appraise the situation.  "We are looking forward to a swift Vatican decision on this," Father Segar added.

Meanwhile, Indonesia’s Ambassador to the Holy See, Antonius Agus Sriyono told Vatican Radio he was currently observing the crisis in Ruteng Diocese, but if “requested” he was ready “to become a mediator” of his government with the Vatican.

Last year, Bishop Leteng was accused of secretly borrowing $94,000 from the Indonesian Bishops' Conference in Jakarta and $30,000 from the diocese but failed to provide an accountability report. In a meeting, the 58-year old bishop is said to have told the priests the money was used to finance the education of a youth from a poor family who was studying to be a pilot in the United States.  When asked for details, the bishop told them that it was none of their business.

However, the priests suspect the money went to a woman who they allege the bishop was having an affair with. The alleged affair surfaced in 2014 after a priest who chose to leave the priesthood went public with the allegation.  The bishop denied the allegation, calling it "slanderous."‎

58-year old Bishop Leteng has been heading Ruteng Diocese since April 2010.  The former rector of St. Peter Major Seminary in Ritapiret was appointed bishop by Pope Benedict on 7 November, 2009 and was consecrated bishop the following year on 14 April.

On June 12, 69 dissenting priests in Ruteng Diocese quit their posts as episcopal vicars and parish priests, demanding Bishop Leteng completely change how the diocese is run.  The priests’ spokesman, Father Marthen Chen earlier told reporters an overhaul was desperately needed "so the church can be ‎truly in line with the guidance of the Holy Spirit."‎  ‎"We demand renewal in pastoral work as well as in church and financial management," Father Chen ‎said, without elaborating.‎  (Source: UCAN)