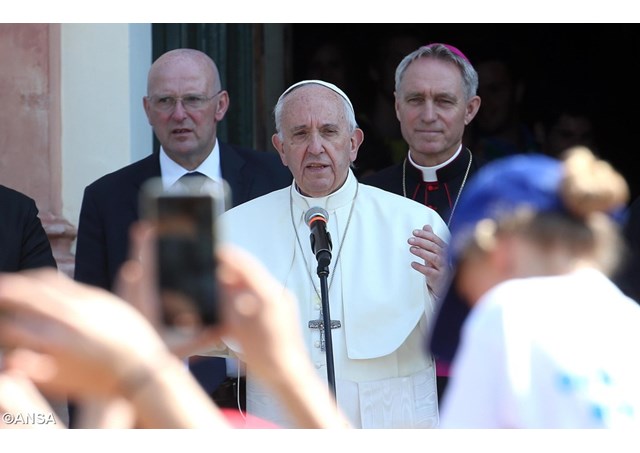 (Vatican Radio) Pope Francis on Tuesday made a pilgrimage to northern Italy to honor two 20th-century parish priests whose commitment to the poor and powerless challenged many faithful - inside and outside the Vatican - to step outside their comfort zones.

The Pope flew by helicopter to Bozzolo, near Cremona in the region of Lombardy, to pray at the tomb of Don Primo Mazzolari, parish priest of a small town, a scholar who wrote about St. Francis and Blessed John Henry Newman, he opposed the Mussolini regime and emphasized the importance of the poor. Sanctioned for a time by diocesan authorities, Father Mazzolari was a friend of Pope John XXIII and praised by the future Pope Paul VI. He died in 1959.

The Pope then travelled to Barbiana, near Florence to pay tribute to Don Lorenzo Milani, a wealthy convert to Catholicism who founded a parish school to educate the poor and workers.

In Bozzolo, Francis stood in silent prayer before the simple tomb of Mazzolari, and then delivered a long tribute to the priest whom he described as “Italy's parish priest.”

The Pope quoted Mazzolari’s writings about the need for the Church to accompany its flock and recalled his exhortation that a priest's job isn't to demand perfection from the faithful, but to encourage them to do their best.

Quoting Mazzolari’s own words he said: ``Let us have good sense! We don't to massacre the backs of these poor people.''

He said the legacy of priests like Don Mazzolari is a bright one that challenges us to leave our comfort zones.

Pope Francis warned against those men of the Church who “do not want to soil their hands” and who “observe the world through a window”; he warned against those who engage in what he called “separatist activism” where one runs Catholic institutions like banks or businesses; and he spoke out against the temptation for spiritualism which dehumanizes and is devoted only to the apostolate.

Don Mazzolari, the Pope said, conceived the Church going forth into world in the firm belief that that is the only way to reach out to those who do not come to Church any more.

“He was rightly described as ‘the parish priest of those who are far’ because he always loved those on the peripheries and to them dedicated his mission.

Pope Francis concluded his speech with an exhortation to all priests to “listen to the world”, to “step into the dark areas without fear because it is amongst the people that God’s mercy is incarnate.”

He urged them to live in poverty and said that the credibility of the Gospel message is in the simplicity and poverty of the Church and he reminded them always to treasure the lesson of Don Mazzolari.