Pope at Mass: God’s power saves us from weakness and sins 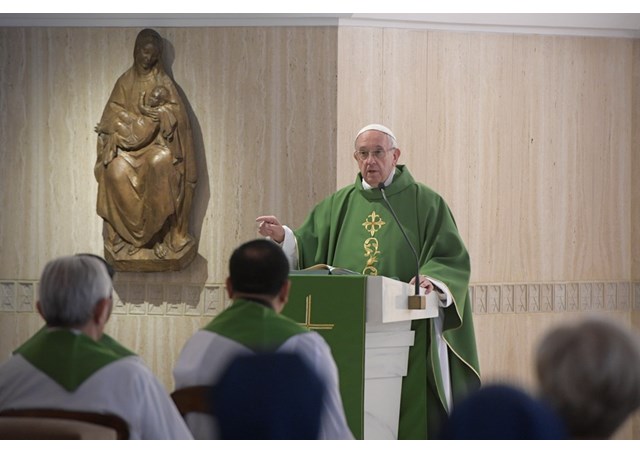 (Vatican Radio)  In order to be saved and healed by God we must recognize that are weak, vulnerable and sinful like earthen vessels, said ‎Pope Francis on Friday.  And this will lead us to happiness, he said in ‎his homily at the morning Mass in the Casa Santa Marta chapel in the Vatican.  He was reflecting on the Second Letter to the Corinthians, where St. Paul speaking about the mystery of Christ, says we have this treasure of Christ in our fragility and vulnerability because we are vessels made of clay.

Not being shameful is hypocrisy

"All of us are vulnerable, fragile, weak, and we need to be healed,” the Pope said.  But recognizing our vulnerability is one of the most difficult things of life.  At times, we try to cover this vulnerability with cosmetics in order to disguise it, pretending it does not exist.  And disguises are always shameful, the Pope said. “They are hypocrisy."

Temptation to cover our weakness and sins

Pope Francis explained that besides being hypocritical towards others, we are also hypocritical within ourselves believing "to be something else”, hence not needing healing and support.  This, the Pope pointed out, is the path to vanity, pride and self-reference of those who do not feel themselves made of clay and thus seek salvation and fulfilment in themselves.  Instead, as St. Paul says, it is the power of God that saves us because of our vulnerability. Hence we are troubled but not crushed; we are shaken but not desperate; we are persecuted but not abandoned; struck down but not killed.  There is always this relationship between clay and power, clay and treasure. But the temptation, the Pope said,  is always the same: to cover, conceal and not believing we are made of clay.  This is the hypocrisy towards ourselves.

When we accept our weakness, God comes with His salvation and happiness

In this regard, Pope Francis spoke about confession where we confess our sins in a way whitewashing the clay a bit in order to appear strong.  Rather, the Pope said, we must accept our weakness and vulnerability, even if it is "difficult" to do so.  Hence the importance of "shame".  It is shame that broadens the heart to allow the power of God in -  the shame of being clay and not a silver or gold vase.   When Peter objected to Jesus washing his feet, he did not realize he was made of clay needing the Lord’s power to be saved.  It’s only when we accept we are made of clay that the extraordinary power of God will come and give us the fulfilment, salvation, happiness and joy of being saved, thus receiving the Lord's "treasure".