Council of Cardinals updates Pope on state of Vatican reform 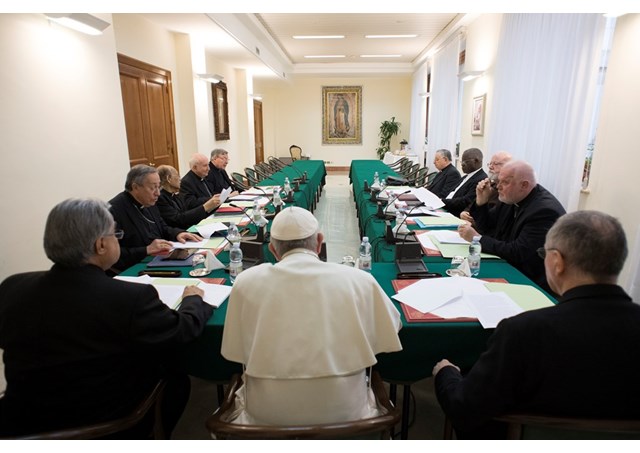 (Vatican Radio) The 20th meeting of the Council of Cardinals concluded on Wednesday in the Vatican.

A briefing by Greg Burke, Director of the Holy See Press Office, said the so-called C9 members met with the Pope for three days. The next such meeting is scheduled to  take place in September.

The Council is studying the plans for reforming the Apostolic Constitution “Pastor Bonus” on the Roman Curia.

According to Burke amongst the topics under discussion were new ways in which the Roman Curia can better serve the local Churches, further decentralization of Roman Dicasteries, the status of unmarried and widowed deacons and internal issues regarding various Dicasteries of the Curia.

Cardinal George Pell reportedly provided an update on the work of the Secretariat for the Economy, of which he is the President, while the prefect of the Secretariat for Communications, Monsignor Dario Edoardo Viganò presented a report on the state of the reform of the Vatican’s communication system as well as a presentation of the new projects involving Vatican media in accordance with Pope Francis’ call to push forward with courage in order to embrace the challenges of digital and technological evolution in a rapidly changing world.

Please find below the full text of the briefing:

Briefing of the Director of the Holy See Press Office on the Twentieth Meeting of the Council of Cardinals, 14.06.2017

At 13.00 today, the Director of the Holy See Press Office, Greg Burke, gave a briefing on the twentieth meeting of the Council of Cardinals attended by the Holy Father Francis.

The Council of Cardinals met with the Holy Father for three days: Monday 12, Tuesday 13 and Wednesday 14 June. All members of the Council were present apart from Cardinal Sean O’Malley of Boston.

Pope Francis was absent this morning owing to the General Audience.

The working sessions took place in the morning from 9.00 to 12.30, and in the afternoon from 16.30 to 19.00, and were dedicated to further consideration of the ways in which the Roman Curia can better serve the local Churches. For example, a larger consultation board made up also of members from consecrated life and the laity, for candidates proposed for appointment as bishop.

Among other proposals, the possibility of transferring some functions from the Roman Dicasteries to the local bishops or episcopal councils, in a spirit of healthy decentralization.

The Cardinals gave further consideration to various Dicasteries of the Curia, in particular the Congregation for the Evangelization of Peoples.

Cardinal George Pell provided an update on the work of the Secretariat for the Economy, of which he is the president. Particular attention was paid to the steps ahead made in the process of planning of economic resources and in monitoring financial plans for the first trimester of 2017 which have substantially confirmed, with few exceptions, the budget data. Shortly the budget process will begin for 2018, and the monitoring for the second trimester of 2017.

The prefect of the Secretariat for Communications, Msgr. Dario Edoardo Viganò, presented a report on the state of the reform of the communication system of the Holy See; he illustrated the economic and management progress of the SPC, demonstrating positive results. He then explained the projects in the realization phase of the new communication system, in accordance with the Holy Father’s recent address on the occasion of the Dicastery’s first Plenary.