Pope Francis: hearts open to gift and service of consolation 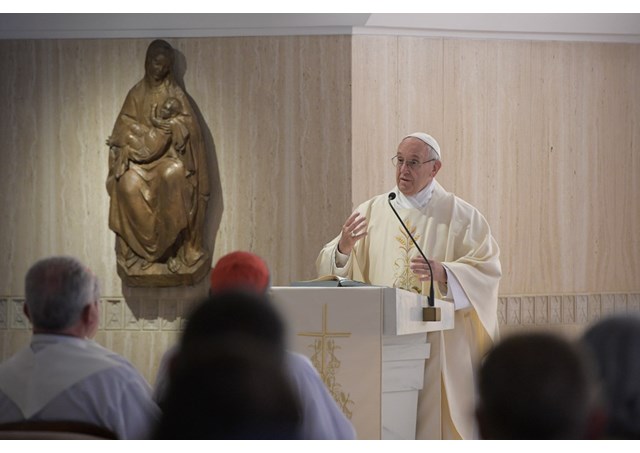 Consolation is not autonomy

The reading from the 2nd Letter of St. Paul to the Corinthians teaches us that consolation is not – Pope Francis said – “autonomous”:

“The experience of consolation, which is a spiritual experience, always needs ‘someone else’ in order to be full: no one can console himself, no one – and whoever tries to do it ends up looking into the mirror – staring into the mirror and trying to ‘make oneself up’. One ‘consoles’ with these closed things that do not let one grow, and the air that one breathes is that narcissistic air of self-reference. This is the made up consolation that does not let one grow – and it is no [real] consolation, because it is closed, it lacks an alterity.”

There are so many people in the Gospel, says the Pope in Homily at Casa Santa Marta. For example, the doctors of the Law, "full of their own sufficiency," the wealthy Epulone who had a feast on holiday thinking he was so consoled, but above all to express this attitude better is the Pharisee's prayer in front of the altar, which says: "Thank you for not being like everyone else." "This was in the mirror," the Pope notes, "looking at his soul made up of ideologies and thanking the Lord." Jesus therefore sees this possibility of being people who in this way of life "will never come to fullness, to the utmost to" swelling ", that is, to the vantage.

Pope Francis said that the “Doctors of the Law” of which the Gospels speak are like this: “filled with self-sufficiency.” He also offered the example of the rich man – a priest – in the Gospel according to St. Luke, who lived his days from one feast to another, believing himself thus to be “consoled” – or the figure par excellence of the Pharisee who prayed, “Thank you, Lord, for not making me like those others.”

“That man looked at himself in the mirror,” said Pope Francis. “He gazed on his one likeness embellished with ideologies, and thanked the Lord.” The Holy Father went on to say that Jesus shows us such persons because they represent a real possibility – it is possible to live in such a manner that, “one shall never arrive at fullness, but only achieve a state of being bloated,” that is, of being puffed up with vainglory.

Consolation is gift and service

In order to be true, consolation therefore needs an “other”. First of all, consolation is received, because, “it is God who consoles,” who gives this “gift.” Then true consolation also matures in another “other”, when one who has been consoled, consoles in turn. “Consolation is a state of transition from the gift received to the service given,” the Pope explains:

“True consolation has this twofold ‘otherness’: it is gift and service. And so it is, if I let the consolation of the Lord enter as a gift it is because I need to be consoled. I am in need: in order to be consoled, one must recognize oneself as being in need of consolation. Only then does the Lord come, console us, and give us the mission to console others. it is not easy to have one’s heart open to receive the gift and to serve, the two ‘alterities’ that make consolation possible.”

The teaching of the Beatitudes

An open heart is needful, then, and in order to be open a heart must be happy – and the Gospel Reading of the day tells us precisely “who are the happy, the ‘blessed’.”:

“The poor: the heart is opened with an attitude of poverty, of poverty of spirit; those who know how to cry, the meek ones, the meekness of heart; those hungry for justice who fight for justice; those who are merciful, who have mercy on others; the pure of heart; peace-makers and those who are persecuted for justice, for love of righteousness. Thus is the heart opened and [then] the Lord comes with the gift of consolation and the mission of consoling others.”

Those who have their heart closed

Such people are contrasted with those who are “closed” and feel “rich in spirit” – that is, “sufficient,” i.e., “those who do not need to cry because they feel they are in the right,” the violent who do not know what meekness is, the unjust who commit injustice, those who are without mercy, who never need to forgive because they do not feel the need to be forgiven, “the ones whose hearts are dirty,” the “makers of war” and not of peace, and those who are never criticized or persecuted because injustice done to other people is of no concern to them. “These,” Pope Francis says, “have a closed heart.” They are not happy because the gift of consolation cannot enter their closed hearts, and so they cannot give it in turn to those who need it.

Open the door of the heart

In conclusion, Pope Francis asked the faithful to think about their own hearts, whether they are open and able to ask for the gift of consolation and then give it to others as a gift from the Lord, saying that we need to return during the course of each day to this consideration, and thank the Lord, who “always seeks to console us,” and “asks us to open the doors of our hearts even only just a little bit.” Then, said Pope Francis, “[The Lord] will find a way in.”