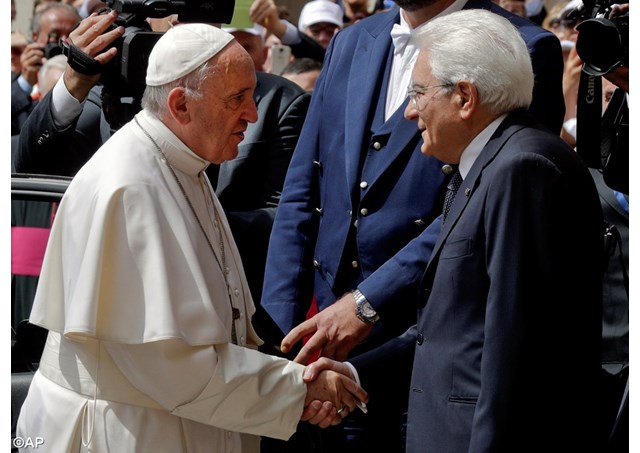 (Vatican Radio) Pope Francis paid an official visit on Saturday to the President of Italy, Sergio Matarella at the Quirinale palace in Rome. During his visit he spoke of  “the Church in Italy as being strongly linked to the soul of the country.”

The last time Pope Francis visited the Quirinale, the residence of the President of Italy and of Popes of the past, was back in November 2013 during the Presidency of Giorgio Napolitano, but this time the Holy Father was paying a call on Sergio Mattarella, President of the Republic since 2015.

In the majestic surroundings of this historic palace Pope Francis in a speech to the President spoke about Christian hope in a world of problems and risks.

The Pope said that Italy and the whole of Europe were being called to deal with problems such as international terrorism, “the widespread migratory phenomenon and the serious and persistent social and economic imbalances in many areas of the world.”

As far as the vast and complex migratory phenomenon is concerned, Pope Francis commented that  “it is clear that a few nations cannot bear the full burden, adding, “for this reason, it is indispensable and urgent to develop a comprehensive and intensive international cooperation.”

But the Holy Father also noted that Italy, “through the generous nature of its citizens and the commitment of its institutions was working to transform these challenges into growth opportunities and new opportunities.

Pope Francis in particular highlighted the work being done by Italy to help refugees who land on its shores, and the commitment of volunteers and parishes especially during the earthquakes that hit Central Italy last year, highlighting that this was Christianity at work.

Another issue that the Pope returned to during his address was that of employment and he reiterated his call “for generating and accompanying processes that give rise to new decent working opportunities.”

To those gathered in the Quirinale the Holy Father stressed that “the Church in Italy is a vital reality, strongly linked to the soul of the country…”

In conclusion, Pope Francis said that “in the Catholic Church and in the principles of Christianity…, Italy will always find the best ally for the growth of society, for its concord and for its true progress.”