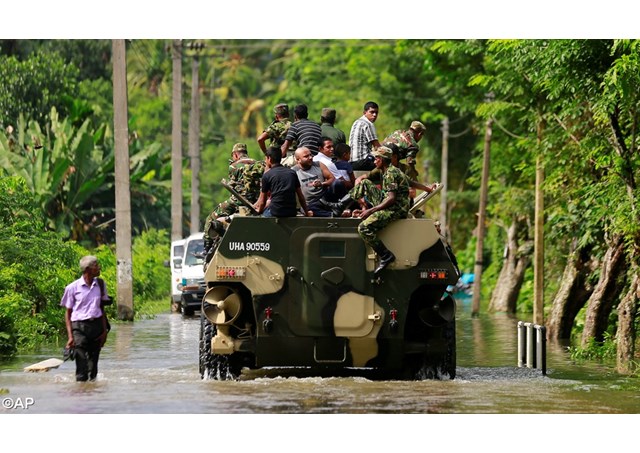 Sri Lankan bishops have called on the Catholic community to continue supporting hundreds of thousands affected by the devastating cyclonic storm that triggered floods and landslides in the south and west of the island nation.  The Catholic Bishops' Conference of Sri Lanka issued a statement, June 1, signed by its president, Bishop Winston Fernando of Badulla and conference secretary-general Bishop Valence Mendis of Chilaw, calling for "continued solidarity" toward humanitarian efforts.  The bishops called on Catholics to "extend their fullest cooperation to provide humanitarian help" through the respective Caritas, government agencies and civil society organizations. "Any financial, human and material support will be invaluable to those affected who have lost their personal belongings and properties to help them regain their confidence and return to a normal life," the statement read.

Some 658,500 people have been displaced by floods and landslides in 15 districts and 68,734 persons are living temporarily in 355 camps, following the May 30 cyclone.   With a further 95 missing people now declared dead by the ministry for Public Enterprise Development, the death toll has risen above 300.  Sri Lanka's Disaster Management Centre (DMC) estimates that over 2,500 houses were destroyed ‎and ‎nearly 15,900 damaged. These numbers could rise as data from damage assessments is compiled in ‎the ‎coming weeks.‎  ‎

Father Mahendra Gunathilake, Caritas national director, said they are continuing extensive relief operations and have distributed 60 truck-loads of essential commodities.  "Every Caritas center, not impacted by the adverse weather, has collected relief items for the worst-affected areas in Ratnapura, Galle and Colombo," Father Gunathilake said.    The most severely impacted district was Galle where, according to reliefweb.int, 142,149 people, some 36,314 families, were affected. "Caritas provided 20,645 packets of cooked meals and 2,614 packets of dry rations in the three days following the floods and landslides," the priest added.  "Caritas is about to distribute 8,000 rupees-worth of dry rations among 5,000 families. The northeastern dioceses have collected close to 1 million rupees to support the flood victims,” Fr. Gunathilake said.

Anton Saman, an organizer of one of collection centers in Negombo said, "Hundreds of people bring large quantities of relief materials from morning until night."  The response has seen Church communities, Buddhist temples, schools, village and voluntary groups committing personnel, facilities and resources to the recovery efforts.  A week after the cyclone struck, the focus is now expanding to help the people return to any semblance of normality.

Father Gunathilake said Caritas is “asking for education materials for school children, hygiene and cleaning equipment for common areas in villages."  Some 25,000 school children lost their school books and stationery in the flood-affected areas.

Several other bishops also expressed concern saying flood victims need to be assured and made to feel they are not alone or abandoned.

International assistance has also arrived in Sri Lanka from India, Pakistan, China, Australia and the European Union.  United Nations agencies ‎are working to provide shelters and other emergency kits while seeking to contain a mosquito-borne ‎disease that is starting to “spiral out of control.”‎   The International Organization for Migration (IOM) plans to provide 3,700 shelter repair kits, 5,000 ‎non-food relief item kits and 250 temporary shelters, with funding sought from the UN Central ‎Emergency Response Fund (CERF), said the UN migration agency.  The intervention is targeted at an estimated 74,750 people.‎

Threat of diarrhoea and dengue

On Friday, the UN Humanitarian Country Team launched an emergency response plan seeking $22.7 ‎million to address the critical life-saving and protection needs of 374,000 people in seven districts, ‎targeting four priority sectors, including shelter, food, health and water and sanitation.‎   IOM will co-lead the emergency shelter and non-food item sector, which is appealing for $6.5 million.‎  Meanwhile, the UN Children's Fund (UNICEF) is calling for $3.5 million to keep vulnerable children ‎safe.‎  ‎“So far we have delivered water and sanitation supplies, we are working on education supplies, ‎strengthening health systems and rehabilitating basic health services and working on disease control for ‎both diarrhoea and dengue which is starting to spiral out of control,” said UNICEF country ‎representative Tim Sutton.‎