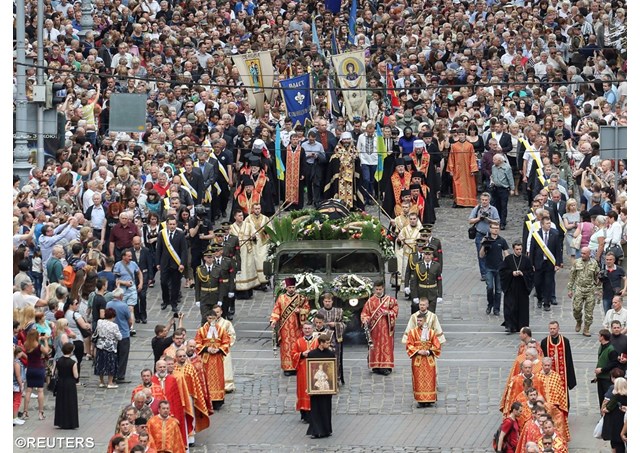 (Vatican Radio) In a heartfelt personal letter, Pope Francis has expressed his desire to “be among those praying to the heavenly Father” for the “chosen soul of our Brother” Cardinal Lubomyr Husar.

The Holy Father noted the “extraordinary influx of people” paying their respects to the former head of the Ukrainian Greek Catholic Church. This, he said, “is an eloquent sign of what he has been: one of the highest and most respected moral authorities of the Ukrainian people in recent decades.”

In his letter, addressed to Husar’s successor, Major Archbishop Sviatoslav Shevchuk, Pope Francis spoke of the late Cardinal’s efforts to lead his people beyond “the legacy of the ‘catacombs’ into which it was forced by persecutions.” He did so not only by restoring ecclesiastical structures, but especially through “the joy of his own story, founded on faith” that endured “through and beyond suffering.”

Pope Francis spoke of Cardinal Husar as “a master of wisdom,” who spoke to his people in simple, yet profound words. “His was the wisdom of the Gospel, the bread of the Word of God broken for the simple, for the suffering, for all those seeking dignity.” After his ministry as “father and head” of the Ukrainian Greek Catholic Church, the Pope said, and with the onset of old age and illness, Cardinal Husar’s presence became “even more intense and rich.” He prayed for all, and when he spoke, “everyone felt that a Christian was speaking, a Ukrainian passionate about his identity, always full of hope, open to the future of God.” Pope Francis praised him for “the warmth of his great humanity and exquisite kindness,” and especially for his ability to welcome and communicate with the young.

“It moves me to think that today all of Ukraine weeps for him,” the Pope said, “but also that many people are certain that he already rests in the embrace of the heavenly Father.” They are certain, he said, that after the example of his “credible and coherent life” they will “continue to benefit from his prayer, with which he will continue to protect his people who are still suffering, marked by violence and insecurity, and yet certain that the love of Christ does not disappoint.”

Pope Francis concluded his letter with a note of gratitude for “this unique religious and social presence in Ukraine’s history,” encouraging the faithful to remain committed to Cardinal Husar’s “constant teaching and total abandonment to Providence.” He called on them to continue “to feel his smile and his caress.”