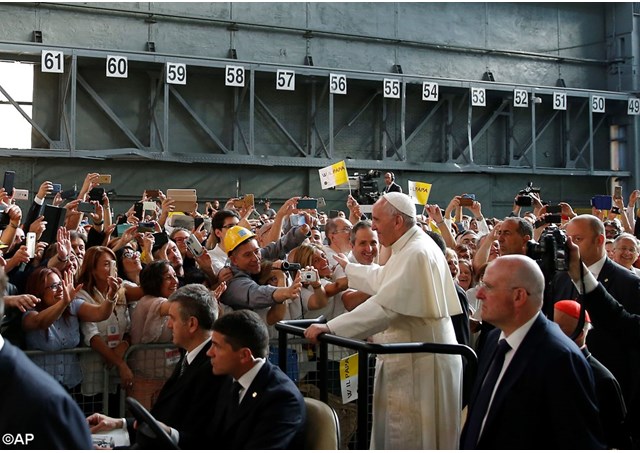 (Vatican Radio) Pope Francis began an intense day-long pastoral visit to Genoa on Saturday morning, with a meeting with workers, management, industrialists, union leaders and representatives of unemployed persons at the ILVA steel works in the city.

Pope Francis’ meeting with the world of labour included four questions regarding the issues ranging from the challenges of ossified and unresponsive bureaucracy to the dehumanizing effects of technology and large forces on the workplace and the labour market: one each from a worker, an entrepreneur, a business-owner, and a union representative.

Right and Duty to Work for All

In each of his responses, Pope Francis focused on the primacy of the human person over the reality and rights of labour and capital, insisting that only a correct vision of human nature can inform and direct our efforts to build a just and harmonious society.

The Pope also insisted forcefully on work as something given to man in the order of creation, and essential to genuine human flourishing.

“It is necessary, therefore, to look fearlessly and a sense of responsibility on the technological transformations of the economy and of life, he said, “without resigning ourselves to the ideology that seems to be gaining a foothold wherever one looks, which envisions a world in which only a half or maybe two-thirds of employable people actually work, and the others maintained with a welfare cheque.”

“It must be clear,” Pope Francis continued, “that the true objective to reach is not ‘income for all’ but ‘work for all’.”

Also on the Agenda

With a departure at 7AM, the schedule of the visit to the northern Italian port city on the Ligurian coast included five other major appointments, in addition to the meeting with the “world of labour”:

We will be brining you coverage of the trip throughout the day.