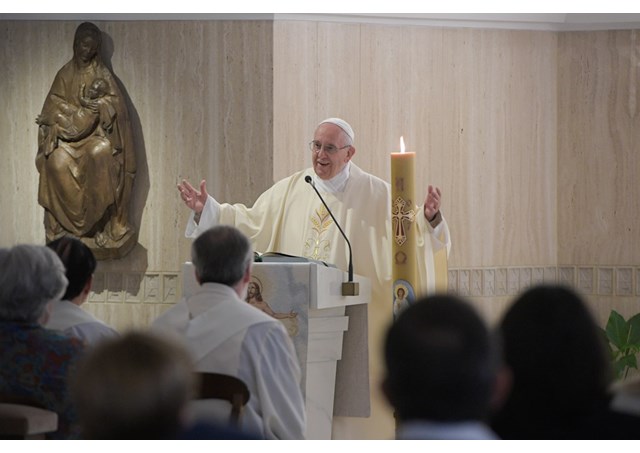 (Vatican Radio) True doctrine unites; ideology divides. That was the message of Pope Francis in the homily at the morning Mass at the Casa Santa Marta on Friday.

The Pope based his reflections on the so-called Council of Jerusalem which, around the year 49 A.D., decided that gentile converts to Christianity would not have to be circumcised.

The Holy Father was commenting on the First Reading, from the Acts of the Apostles. He noted that even in the first Christian community “there were jealousies, power struggles, a certain deviousness that wanted to profit from and to buy power.” There are always problems, he said: “We are human, we are sinners” and there are difficulties, even in the Church. But being sinners leads to humility and to drawing close to the Lord, as Saviour who saves us from our sins. With regard to the gentiles who the Spirit called to become Christians, the Holy Father recalled that, in the reading, the apostles and the elders chose several people to go to Antioch together with Paul and Barnabas. The reading describes two different kinds of people: those who had “forceful discussions” but with “a good spirit,” on the one hand; and those who “sowed confusion”:

“The group of the apostles who want to discuss the problem, and the others who go and create problems. They divide, they divide the Church, they say that what the Apostles preached is not what Jesus said, that it is not the truth.”

The apostles discussed the situation among themselves, and in the end came to an agreement:

“But it is not a political agreement; it is the inspiration of the Holy Spirit that leads them to say: no things, no necessities. Only those who say: don’t eat meat at the time, meat sacrificed to idols, because that was communion with the idols; abstain from blood, from animals that were strangled, and from illegitimate unions.”

The Pope pointed to the “liberty of the Spirit” that leads to agreement: so, he said, the gentiles were allowed to enter the Church without having to undergo circumcision. It was at the heart of the “first Council” of the Church: the Holy Spirit and they, the Pope with the Bishops, all together,” gathered together in order “to clarify the doctrine;” and later, through the centuries – as at Ephesus or at Vatican II – because “it is a duty of the Church to clarify the doctrine,” so that “what Jesus said in the Gospels, what is the Spirit of the Gospels, would be understood well”:

“But there were always people who without any commission go out to disturb the Christian community with speeches that upset souls: ‘Eh, no, someone who says that is a heretic, you can’t say this, or that; this is the doctrine of the Church.’ And they are fanatics of things that are not clear, like those fanatics who go there sowing weeds in order to divide the Christian community. And this is the problem: when the doctrine of the Church, that which comes from the Gospel, that which the Holy Spirit inspires – because Jesus said, “He will teach us and remind you of all that I have taught’ – [when] that doctrine becomes an ideology. And this is the great error of those people.”

These individuals, the Pope explained, “were not believers, they were ideologized,” they had an ideology that closed the heart to the work of the Holy Spirit. The Apostles, on the other hand, certainly discussed things forcefully, but they were not ideologized: “They had hearts open to what the Holy Spirit said. And after the discussion ‘it seemed good to the Holy Spirit and to us.’”

Pope Francis’ final exhortation was to not be afraid in the face “of the opinions of the ideologues of doctrine.” The Church, he concluded, has “its proper Magisterium, the Magisterium of the Pope, of the Bishops, of the Councils,” and we must go along the path “that comes from the preaching of Jesus, and from the teaching and assistance of the Holy Spirit,” which is “always open, always free,” because “doctrine unites, the Councils unite the Christian community, while, on the other hand, “ideology divides.”