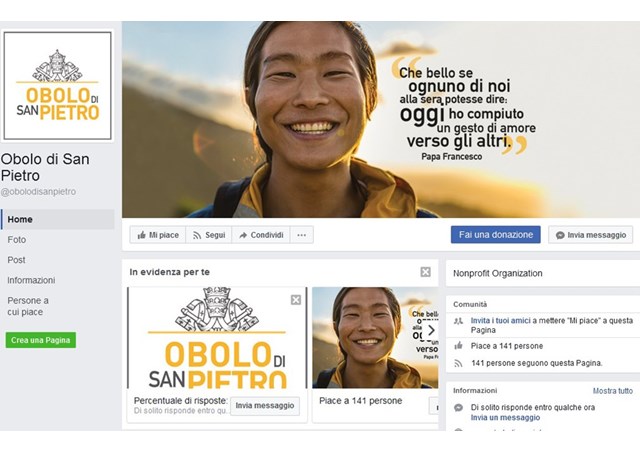 (Vatican Radio) The Holy See Press Office has announced that “Peter’s Pence” will now have a Facebook page.

Peter’s Pence is the name given to the financial support offered by the faithful to the Holy Father as a sign of their sharing in the concern of the Successor of Peter for the many different needs of the Universal Church and for the relief of those most in need.

According to a press release from the Vatican, the decision to utilize the largest social network in the world has a double objective: “on the one hand, to create a community open to everyone wherever the use of Facebook is widespread; and, on the other hand, to share and relate the activities of this longstanding Office of Solidarity.”

Peter’s Pence on Facebook “is intended to promote dialogue with all those who have a common intent, helping the most needy and concretely supporting the works of charity.” The press release gives examples of a number of projects supported by Peter’s Pence: the expansion of the “Filippo Smaldone” Institute for poor and hearing-impaired children in Kigali, Rwanda; the awarding of scholarships to help displaced university students of Iraqi Kurdistan; the opening of a new primary school for Dalit children in India.

The new “Peter’s Pence” Facebook page will be able to draw attention to these and other charitable works supported by the organization. Traditionally the collection for Peter’s Pence takes place throughout the Catholic world on the Solemnity of St Peter, 29 June, or on the Sunday closest to that feast, depending on the diocese.

As with other social media platforms, this initiative was born of the desire of the Holy See, the fruit of a close collaboration between the Secretariat of State, the Secretariat for Communications, and the Governorate of the Vatican City State.

For more information on the work of Peter’s Pence, one can visit the Peter's Pence website.