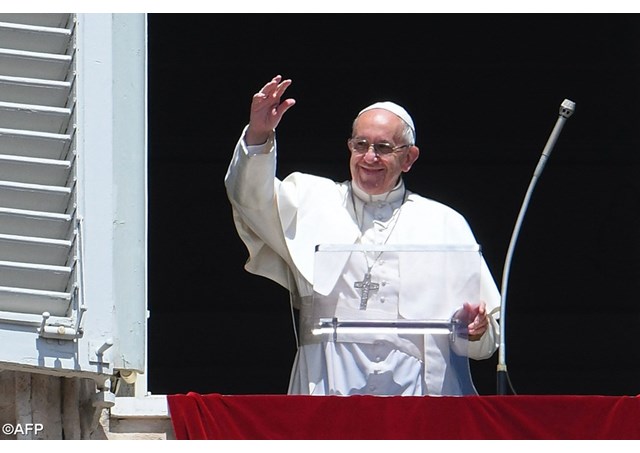 (Vatican Radio) “Let us greet the Virgin of Fatima!”

Following his pilgrimage to Fatima, Pope Francis said the Regina Coeli on Sunday, took on “a particular significance, imbued with memory and prophecy for those who view history with the eyes of faith.” Reflecting on his journey, the Pope said, “At Fatima I was immersed in the prayer of the faithful holy People, prayer that for one hundred years has flowed there like a river, for the maternal protection of Mary for the whole world.”

The Holy Father focused on the “recollected and contemplative climate” during his pilgrimage. “And at the centre of everything,” he said, “was and is the Risen Lord, present in the midst of His People in the Word and in the Eucharist; present in the midst of the many sick people, who are the protagonists of the liturgical and pastoral life of Fatima, as of every Marian sanctuary.”

One of the highlights of Pope Francis pilgrimage was the Solemn Mass on Saturday, when he canonized two of the visionaries of Fatima, Francisco and Jacinta Marto. With the canonization, the Pope said, “I wanted to propose to the whole Church their example of adhesion to Christ and to evangelical witness… And I also want to propose to the whole Church to have the heart of children.” He said their sanctity is not “a consequence of the apparitions, but of the fidelity and ardour with which they corresponded to the privilege they had received of being able to see the Virgin Mary.”

He pointed out that the visionaries, after having seen Mary, frequently said the Rosary, did penance, and offered sacrifices for an end to the war [World War I, which was raging at the time], and for the souls most in need of divine mercy. “In our day, too,” the Pope said, “there is great need of prayer and of penance to implore the grace of conversion,” and an end to the many wars and conflicts in the world today, “which disfigure the face of humanity.”

“Let us allow ourselves to be guided by the light that comes from Fatima,” Pope Francis said, before concluding his reflection with a prayer: “May the Immaculate Heart of Mary always be our refuge, our consolation, and the way that leads to Christ.”