Pope Francis: a pilgrim of peace and hope in Fatima 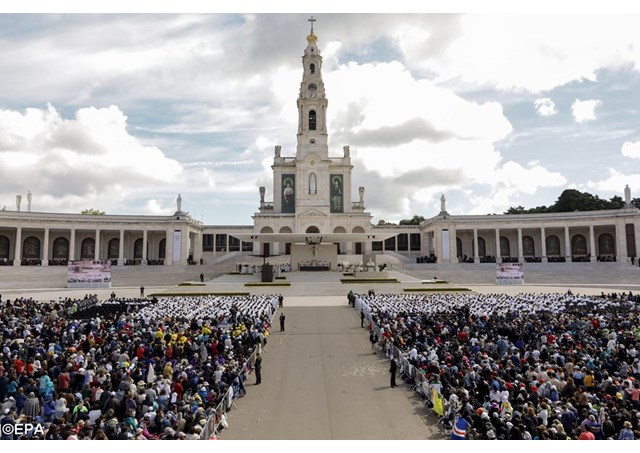 (Vatican Radio) Pope Francis concluded his pilgrimage to Fatima on Saturday, with a Mass marking the centenary of the Marian apparitions there, which made the place a famous and beloved place of pilgrimage to millions of faithful from all around the world and across generations.

During the Mass, the Holy Father canonised two of the seers of Fatima, declaring Francisco and Jacinta Marto to be saints in heaven.

At the end of Mass, the Holy Father led the faithful in a moment of Eucharistic adoration and offered Eucharistic benediction. He also met briefly with a group of sick people, before heading to lunch with the Bishops of Portugal, after which he headed to the papal plane for his flight back to Rome.

Our special envoy, Chris Altieri, was in Fatima from start to finish, and sent this overview of this Apostolic pilgrimage.

Pope Francis presided over Mass for hundreds of thousands of pilgrims at the Marian shrine in Fatima on Saturday, the 100th anniversary of the beginning of the apparitions of Our Lady there to three small shepherd children.

The children were a brother and sister, Francisco and Jacinta Marto, and their cousin, Lucia.

Starting on May 13th, 1917, and running until October 13th of that same year – the story goes – Our Lady would appear and entrust the three children with several messages and three “secrets”.

Those secrets have since been generally understood to regard the conduct of human affairs in the years and decades that followed the bloody middle of 1917, at the beginning of the bloodiest century in world history to date.

During the Mass, Pope Francis canonized two of the children, Francisco and Jacinta, declaring them saints in heaven and ordering that they be honoured throughout the whole Church.

The canonisation ceremony itself was powerfully moving: before a sea of humanity gathered together for the purpose from every corner of the globe, it was conducted in the local language, Portuguese – a departure from the standard procedure, which uses Latin.

About the day, there are a thousand details in which one could get lost: from the glorious and almost constant sunshine that gave the forecasts for the morning the lie - at least for as long as the ceremonies lasted, to the practiced efficiency and cheerfulness of the local people – every May 13th is a big day here – to the patience and even cheerful orderliness of the pilgrims – even and especially the young ones – many of whom had kept their vigil all through the night and into the morning.

One thing in the way of local colour was particularly impressive: the votive candles – thousands of them – lining the short walls enclosing the plaza between the basilicas, and left at the feet of the several statues in the plaza itself, which had pierced the night with their gentle, pertinacious glow, and were gone by morning.

I mean to ask: details apart, what is the story here?

Not to put too fine a point on it: why should we care?

Francisco and Jacinta would die within three years of the apparitions, while their cousin, Lucia, went on to join the Discalced Carmelite order and lived a long life of prayerful seclusion, dying in 2005 at the age of 97.

So, they never really did anything, at least not as far as the world measures achievement.

Still, people have been coming to this place for a century now, to participate in the witness of those shepherd children – and now we know that two of those children are saints in heaven: Francisco and Jacinta, and Sr. Lucia’s cause is open.

I’ll tell you one thing they did: they told the truth.

Those, who disbelieved the shepherd children in 1917, or sought to protect them from themselves, or simply opposed them, have gone to their reward, and while some of Our Lady’s promises seem arguably to have been kept, and the worst of the consequences against which she warned us seem perhaps to have been averted at least for now, the spectre of war has not ceased, and many nations that once made the Cross of Christ their glory, seem now to have forgotten him and to scoff at His commands.

There have always been scoffers, and there always will be, and there’s nothing any of us can do about that.

Today’s scoffers are not all yesterday’s scoffers though: and many of those who scoffed at the children while they lived, were converted to repentance and belief by the working of more spectacular wonders.

Many more scoffers through the years and decades since, have been converted by the quiet witness of those, who continue to come here.

Even the Church was not quick to accept that Francisco and Lucia could be saints: not that they might not be in heaven, but that they had not the psychological maturity to make an act of faith worthy of imitation – or so the argument ran.

In this day – our own – in which many people scoff at truth itself, and do not really expect anyone to believe anything – the word of a child or the word of a king – the story of three shepherd children, who witnessed a most extraordinary thing, and told of what they saw and heard as best they could according to the lights God gave them, and despite significant consequences and threats of worse things still, stuck to their story: that is a story worth telling, and one the world needs to hear.

It is an appalling choice, and it is one we must make every hour of every day: either we decide that we shall tell the truth, come what may, and expect our fellows to do the same, or there can be no fellowship to speak of.

That is the story to which Pope Francis’s pilgrimage has called our attention, before which is the story of the Queen of Heaven who calls us to prayer for the conversion of hearts and for peace on Earth, and beyond which is a future, the details of which are uncertain, but the outcome of which is foretold: “In the end, my Immaculate Heart will triumph.”

What happens in the space between is up to us.

That’s what we call “a story with legs” in the trade.