Pope: Christians are always on the go in their journey to meet the Lord 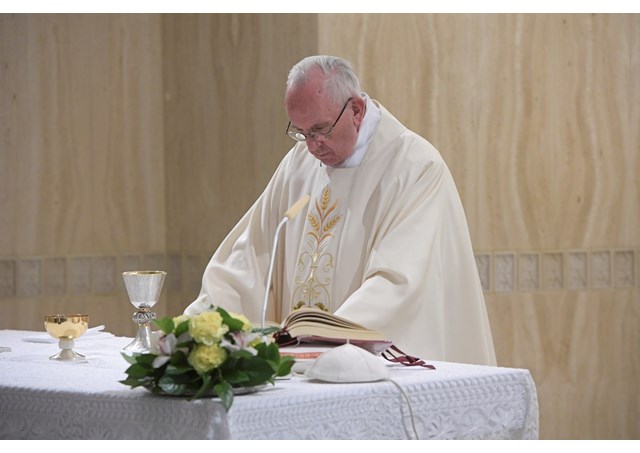 (Vatican Radio) Pope Francis said the life of every Christian is a journey and a process during which to deepen the faith.

Speaking during the homily at morning Mass at the Casa Santa Marta, the Pope reflected on the liturgical reading of the day in which St. Paul tells the story of Salvation leading up to Jesus.

During the course of history, Pope Francis said, many of our conceptions have changed. Slavery, for example, was a practice that was accepted; in time we have come to understand that it is a mortal sin.

“God has made himself known throughout history” he said, “His salvation” goes back a long way in time. And he referred to Paul’s preaching in the Acts of the Apostles when he tells the God-fearing children of Israel about the journey of their ancestors from the Exodus from Egypt until the coming of the savior, Jesus.

The Pope said salvation has a great and a long history during which the Lord “guided his people in good and in bad moments, in times of freedom and of slavery:  in a journey populated by “saints and by sinners” on the road towards fullness, “towards the encounter with the Lord”.

At the end of the journey there is Jesus, he said, however: “it doesn’t end there”.

In fact, Francis continued, Jesus gave us the Spirit who allows to “remember and to understand Jesus’ message, and thus, a second journey begins.

Slavery and the death penalty were once accepted; today they are considered mortal sins

He pointed out that some things that “once seemed normal and not sinful, are today conceived as mortal sins:

"Think of slavery: at school they told us what they did with the slaves taking them from one place and selling them in another…. That is a mortal sin” he said.

But that, he said, is what we believe today. Back then it was deemed acceptable because people believed that some did not have a soul.

And reflecting bitterly on the fact that today “there are no slaves”, Pope Francis pointed out there are in fact many more of them…. but at least, he said, we know that to enslave someone is to commit a mortal sin.

The same goes for the death penalty: “once it was considered normality; today we say that it is inadmissible” he said.

The same concept, he added, can be applied to “wars of religion”: as we go ahead deepening our faith and clarifying the dictates of morality "there are saints, the saints we all know, as well as the hidden saints."

The Church, he commented, “is full of hidden saints”, and it is their holiness that will lead us to the “second fullness” when “the Lord will ultimately come to be all in all”.

Thus, Pope Francis said "The people of God are always on their way”.

When the people of God stop, he said, “they become like prisoners in a stable, like donkeys”. In that situation they are unable to understand, to go forward, to deepen their faith - and love and faith do not purify their souls.

And, he said, there is a third “fullness of the times: ours”.

Each of us, the Pope explained, “is on the way to the fullness of our own time. Each of us will reach the moment in which life ends and there we must find the Lord. Each of us is on the go.”

“Jesus, he noted, has sent the Holy Spirit to guide us on our way” and he pointed out that the Church today is also on the go.

Pope Francis invited the faithful to ask themselves whether during confession there is not only the shame for having sinned, but also the understanding that in that moment they are taking a “step forward on the way to the fullness of times”.

“To ask God for forgiveness is not something automatic” he said.

“It means that I understand that I am on a journey, part of a people that is on a journey” and sooner or later “I will find myself face-to-face with God, who never leaves us alone, but always accompanies us” he said.

And this, the Pope concluded, is the great work of God's mercy.