“Let us receive the Holy Spirit with docility!” Pope Francis 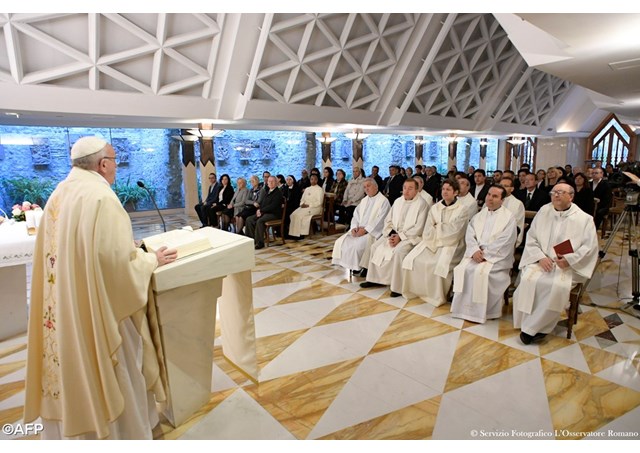 “Let us receive the Holy Spirit with docility!” This was Pope Francis’ message during his Tuesday morning homily during Mass celebrated in the Vatican’s Santa Marta residence.

Joining the Pope at Mass were the Sisters who work in the Santa Marta residence. They were celebrating the feast day of their founder, Saint Luisa di Marillac.

The Pope, continuing to develop the themes he had used in the previous day’s homily, reflected on the early Christians’ docility and openness to the Holy Spirit against the backdrop of the first persecutions of the Christians.

“In these past days we have talked about resistance to the Holy Spirit, for which Saint Stephen scolded the doctors of the law. Today the readings speak of an attitude which is the opposite, namely for Christians to have docility towards the Holy Spirit” said Pope Francis.

He described how, after Saint Stephen was killed, a widespread persecution broke out against Christians and many of them fled to places like Cyprus, Phoenicia and Antioch. But this persecution gave new opportunities to the Christians, he added.  Noting that until this moment, they had only been preaching to the Jews, the Pope pointed out that some of those Christians who went to Antioch began to preach to the pagans because they felt that the Holy Spirit was pushing them to do so. This, he said, showed their docility towards the Spirit.

This docility is spoken about in the first letter of Saint James where he exhorts believers to “Receive the Word with docility.” Pope Francis told the congregation that this means needing to have an open attitude that is not rigid.

“The first path in the journey of docility is therefore to receive the Word which opens the heart. The second path is to know the Word, to know Jesus, who says ‘my sheep listen to my voice, I know them and they follow me’” said the Pope.

“Then there is a third path, familiarity with the Word. To always bring the Word with us. To read it, to open our hearts to the Lord, open our hearts to the Spirit who makes us understand the Word.  And the fruit of this, to receive the Word, to understand the Word, to take it with us, to have this familiarity with the Word, is a great fruit! A person who does this displays goodness, kindness, joy, peace, self-control and meekness.”

The Pope went on to explain  that this meekness is the attitude that gives us docility towards the Spirit.

“But I have to receive with docility the Spirit which brings me the Word. And this docility, by not resisting the Spirit, brings me this way of living, this way of acting. To receive the Word with docility, to know the Word and call to the Spirit to grant us the grace to understand and then to give space for this seed to sprout and grow into this attitude of goodness, meekness, gentleness, peace, charity and self-control.  All this shows a Christian attitude” he said.

The Pope also pointed out that it was not the Apostles who preached to the pagans in Antioch, but others whose names we do not know. And when the Apostle Barnabas arrived in Antioch, he saw there the grace of God, resting in hearts that were faithful to the Lord.

The  Pope concluded his homily by noting that that it was in Antioch that the community of disciples was first given the name Christians.