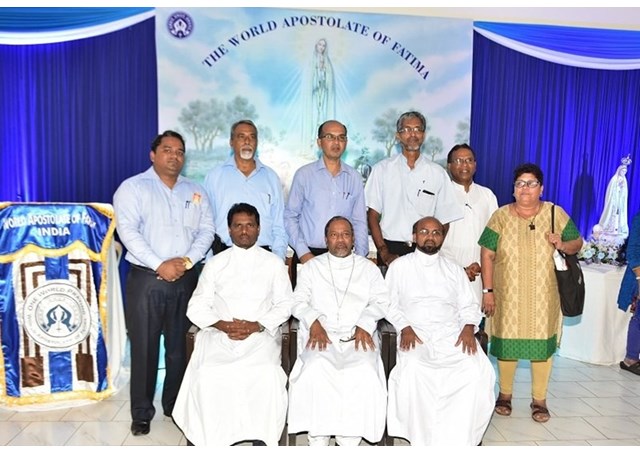 Dr. Celcio Dias of World Apostolate of Fatima, India speaks about the preparations  of the Centenary of Fatima apparitions, which will be celebrated by Pope Francis on May 13.

Dr. Celcio Dias, a medical doctor by profession,  is the International secretary and vice chairman of the Indian centre and Goa unit of the World Apostolate of Fatima (WAF). He spoke at length on WAF association, its purpose, the relevance of the message at Fatima and the  elaborate programmes designed by the Indian Board for a fruitful celebration of the Fatima Centenary in the parishes, chapels, Institutions and houses. The National Ecclesiastical Adviser  of WAF India is Bishop Peter Machado of Belgaum diocese who is  appointed by the  Conference of Catholic Bishops of India.

Listen to the full interview with Dr. Celcio Dias

The World Apostolate of Fatima, which was formerly known as the Blue Army of Our Lady of Fatima is a public International Association of the faithful, approved by the Holy See, whose Decree of Erection was signed on October, 7, 2005, Feast of Our Lady of the Rosary.

On February, 3, 2006, the World Apostolate of Fatima held, in Rome, at the Pontifical Council for the Laity, an official ceremony for the consignment of the decree and the approval of its statutes.

The World Apostolate of Fatima has, as its general purpose, the promotion of the authentic teaching of the Catholic Church and the strict adherence to the tenets of the Gospel; the personal sanctification of adherents through faithful adherence to the message of the Blessed Virgin Mary at Fatima - Portugal, in 1917, to three little shepherds, Lucia, Francisco and Jacinta Marto and the promotion of the common good by the spreading of this same message.

The international association was created, as late as 1947, in the United States of America, by the hand of Father Harold Colgan and Mr. John Haffert. The name given to the movement was initially Blue Army but, as it spread quickly around the world, it became an international apostolate with millions of members and national centres in various countries, adopting the worldwide recognised name World Apostolate of Fatima.

The international headquarters of the World Apostolate of Fatima are in Fatima, Portugal, in the beautiful pilgrim guest’s house, Domus Pacis (“House of Peace”).