Holy See to UN: no to nuclear proliferation 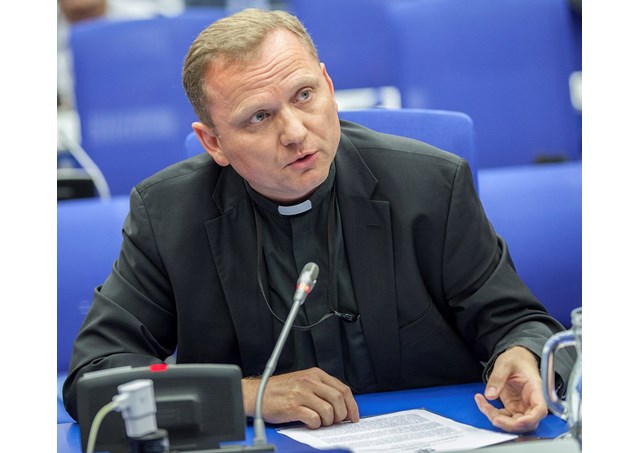 (Vatican Radio) The Head of the Delegation of the Holy See to the Preparatory Committee for the 2020 Review Conference of the Parties to the Treaty on the Non-Proliferation of Nuclear Weapons, taking place in Vienna from May 2-12, Msgr. Janusz S. Urbańczyk, has released his prepared address to the body. Below, please find the full text of his prepared remarks in English...

STATEMENT BY MONSIGNOR JANUSZ S. URBAŃCZYK
HEAD OF THE DELEGATION OF THE HOLY SEE
FIRST PREPARATORY COMMITTEE FOR THE 2020 REVIEW
CONFERENCE OF THE PARTIES TO THE TREATY ON THE NONPROLIFERATION OF NUCLEAR WEAPONS
Vienna, 2-12 May 2017

The Holy See is pleased to participate at this First Preparatory Committee of the 2020 Review Conference of the Parties to the Treaty on the Non-Proliferation of Nuclear Weapons (NPT). Furthermore, my Delegation congratulates you, Mr. Chairman on your appointment, and thanks you for your able stewardship of this important gathering.

The Holy See and the NPT

When the Holy See acceded to the NPT in 1971, it declared that it did so “inspired by its constant desire, illuminated by the teaching of universal brotherhood and of justice and peace between men and peoples contained in the Gospel message to make its contribution to undertakings which, through disarmament as well as by other means, promote security, mutual trust and peaceful co-operation in relations between peoples”.1 The presence of the Holy See at this Preparatory Committee seeks the very same: to lend its moral authority to the efforts “to work for a world free of nuclear weapons, in full application of the Non-Proliferation Treaty, in letter and spirit, with the goal of a complete prohibition of these weapons”.

The foundation of the NPT was the recognition by States Parties that “the devastation that would be visited upon all mankind by a nuclear war” would be so great that “every effort to avert the danger of such a war” and “measures to safeguard the security of peoples” were needed without delay. The Holy See cannot but lament the fact that the potential devastation caused by the use of nuclear weapons so clearly identified over 40 years ago has not been relegated to history. In other words, the efforts of the international community to utilize the NPT to make the world safer have not been sufficient.

The Holy See would, therefore, urge the States Parties to utilise the opportunity granted us by the 10th NPT Review Conference and its Preparatory Committee meetings and to make concrete and consensus-based progress towards nuclear nonproliferation, and towards the ultimate goal of abolishing all nuclear weapons.

Although reaching consensus is seldom without challenges, this city of Vienna has shown time and time again, that serious dialogue, the will to compromise and the full range of the diplomatic toolbox may achieve also that which is characterized as impossible. All States Parties may be assured that the Holy See stands ready to engage constructively in this process.

The search for peace

Pope Francis, following in the footsteps of his venerable predecessors, has repeatedly called on the international community, not only to seek the end of war, conflict and strife, but to embrace forcefully and advance peace. The value of peace must be recognized as an ‘active virtue’, calling for the engagement and cooperation of each individual and society as a whole. As the Pope wrote in his latest World Peace Day Message, an “ethics of fraternity and peaceful coexistence between individuals and among peoples cannot be based on the logic of fear, violence and closed-mindedness, but [must be based] on responsibility, respect and sincere dialogue”. He accompanied these words with the following appeal: “I plead for disarmament and for the prohibition and abolition of nuclear weapons: nuclear deterrence and the threat of mutual assured destruction are incapable of grounding such an ethics”.

Nuclear weapons provide a false sense of security, as do efforts to secure a negative peace through a balance of power. Nations have a right and an obligation to protect their own security, which is strongly linked to the promotion of collective security, the common good and peace. In this perspective, a positive conception of peace is required. Peace must be built on justice, on integral human development, on respect for fundamental human rights, on the protection of creation, on the participation of all in public life, on trust between peoples, on the support of institutions devoted to building peace, and on dialogue and solidarity.

Ultimately, peace must be grounded in those human values that are present in all individuals, peoples, cultures, religions and philosophies.

The Holy See and nuclear disarmament

In this regard, the Holy See was also supportive of the negotiations held in March, to be continued in June/July, on a legally binding instrument to prohibit nuclear weapons. In his letter to Her Excellency Elayne Whyte Gómez, President of the UN conference on a nuclear ban, Pope Francis urged the international community to “go beyond nuclear deterrence… [and] to adopt forward-looking strategies to promote the goal of peace and stability and to avoid short-sighted approaches to the problems surrounding national and international security.” Growing interdependence requires a collective response based on mutual trust, a trust built through dialogue directed to the common good, not the protection of narrow interests. Such dialogue, as far as possible, should include both nuclear and non-nuclear states working together in international bodies such as this one, but should also include the private sector, religious communities, and civil society.

While having no illusions about the challenges involved in achieving a world free of nuclear weapons, the Holy See urges all parties to make progress in relation to the many international instruments and processes: not only the NPT, but also the CTBT, NEW START, the FMCT, as well as unilateral initiatives and other measures. But these steps are in themselves limited, especially in light of growing tensions, continuing proliferation, and the major modernization programs of some nuclear powers. It is, therefore vital that the nuclear-weapon State Parties renew arms control and disarmament processes, in conformity with Article VI of the NPT. In this regard, a very important sign would be to make real efforts towards facilitating the entry into force of the CTBT, which the Holy See considers as the best hope of stemming nuclear proliferation and which could be a key to progress on nuclear disarmament.

The Holy See views the situation on the Korean peninsula with concern and supports the continued efforts by the international community to revive negotiations over denuclearization and peace. In conclusion, the Holy See reiterates its gratitude for the efforts already undertaken by the Parties to the Treaty on the non-proliferation of nuclear weapons in maintaining peace and of advancing multilateral and cooperative security. Moreover, it lends its voice in exhorting political authorities not to limit themselves to ensuring the security of their own citizens but also work actively for the global growth of peace, which humanity very much needs today.