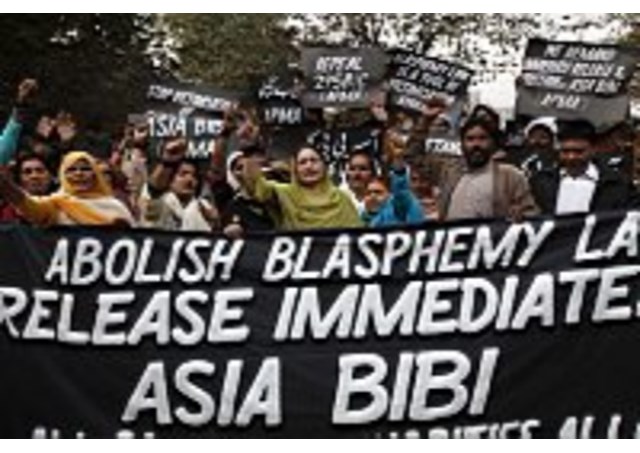 (Vatican Radio)  The Supreme Court of Pakistan has turned down the request for an early hearing of the case of a Catholic mother sentenced to death for blasphemy, that her supporters and rights activists hold hard-line Islamic lobbyists responsible for.  Chief Justice of Pakistan Mian Saqib Nisar on April 26, declined a request for the hearing of the case of Asia Bibi in the first week of June made by her Muslim lawyer Saiful Malook.  ‎“Today I have been informed that the plea was declined by the CJP,” Malook is reported to have told The Express Tribune.

Bibi, a 51-year old fruit picker from Sheikhupura, was convicted of blasphemy and sentenced to death in ‎‎2010 after an argument with a Muslim woman over a glass of water. Her supporters and rights activists maintain her ‎innocence and insist she was falsely accused due to a personal dispute with the accuser.‎ Successive appeals have been rejected, and if the Supreme Court bench upholds Bibi’s ‎conviction, her only recourse will be a direct appeal to the president for clemency.‎

"This is very unfortunate. Her husband became quiet when he heard the latest developments. We shall again apply for the hearing and keep struggling for justice," Joseph Nadeem, executive director of the Renaissance Education Foundation told UCANEWS.  "There are many factors at work behind the slow pace of judiciary. Her case has been in the doldrums due to huge pressure. There will be a strong reaction if Bibi is freed.  Opposing groups have made it a matter of honor and ego," Nadeem  said.

The Renaissance Education Foundation has been supporting Bibi's family in Lahore since she was imprisoned for allegedly defaming Prophet Mohammed in 2009.  If Bibi’s death sentence is upheld, she would be first woman in Pakistan to be put to death for blasphemy.

The last time her case was taken up by the Supreme Court, was on October 13, by a three-judge bench.  However, one of the judges, Iqbal Hameed-ur-Rehman retired from the case because he said he was also a part of the bench in the case of the murder of Punjab Governor Salman Taseer, who was assassinated by his bodyguard in 2011 for his support of Bibi. Judge Pervez Ali Shah fled to Saudi Arabia along with his family in 2011 after getting death threats for convicting Malik Mumtaz Hussein Qadri who confessed to murdering Taseer. Shahbaz  Bhatti, a Catholic and federal minister for minorities, was also assassinated that year for supporting Bibi’s released and recommending reform of the blasphemy law.‎

Analysts consider Qadri's 2016 execution a litmus test for processing blasphemy-related killings.  Now, in the view of Bibi's former attorney, the current environment in the country is not conducive for the dispensation of justice in her case.  "Our plight is that the socio-political atmosphere of the country has no space for discussion on blasphemy laws. The judges know what is happening outside as non-state actors show their strength on the roads demanding death for Bibi," said Naeem Shakir, a Christian lawyer.  The sensitivity surrounding blasphemy laws has made it a political tool to threaten and put down others. The state has a weak narrative regarding this law and its functionaries usually try to evade questions regarding its misuse," he said.

Meanwhile, several Islamic clerics have renewed calls for the execution of Bibi, saying incidents such as the recent lynching of a Muslim university student in Khyber Pakhtunkhwa province, was because of the frustration over delay in Bibi’s execution. Pakistan’s National Assembly adopted a resolution condemning the lynching and resolved to insert safeguards into the blasphemy law but religious parties opposed the idea.

The dreadful blasphemy laws in Pakistan’s Penal Code stipulates life imprisonment for blasphemy against ‎the Qur'an and death penalty for blasphemy against Prophet Mohammed.  Rights groups say the laws are increasingly exploited by religious extremists as well as ‎ordinary Pakistanis to settle personal scores, not just against members of minority communities but also ‎against Muslims.  The law do not clearly define blasphemy and evidence might not be reproduced in ‎court for fear of committing a fresh offence. There are no penalties for false accusations.  Those ‎accused are sometimes lynched on the spot.  If they are arrested, police and the courts often allow trials ‎to drag on for years, afraid of being attacked if they release anyone accused of blasphemy.

Since the passage of blasphemy laws in the early 1980s, religious minorities including Shia, Ahmadi, Hindu and Christians have often been attacked and persecuted for their faith.  Asia Bibi ‎has been rotting in prison since 2009.  ‎"Such atrocities have become routine. The plight of Bibi has had a dampening effect on minorities. Their grief cannot be addressed because of religious retrogressive and extremist groups. Islamists consider her freedom a defeat for their movement," added Shakir.