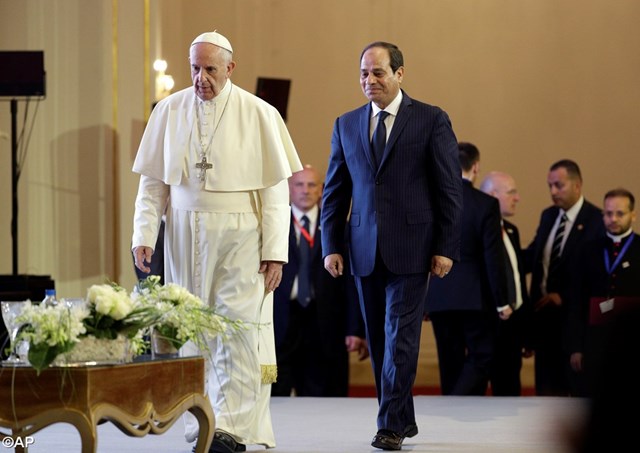 Honourable Members of Government and Parliament,
Distinguished Ambassadors and Members of the Diplomatic Corps,

As-salamu alaykum!  Peace be with you!

I thank you, Mr President, for your cordial words of greeting and for your kind invitation to visit your beloved country.  I have vivid memories of your visit to Rome in November 2014, my fraternal meeting with his Holiness Pope Tawadros II in 2013, and my meeting last year with the Grand Imam of the University of Al-Azhar, Dr Ahmad Al-Tayyib.

I am happy to be here in Egypt, a land of ancient and noble civilization, whose vestiges we can admire even today; in their majestic splendour they appear to withstand the passing of time.  This land is significant for the history of humanity and for the Church’s tradition, not only because of its prestigious past – that of Pharaohs, Copts and Muslims – but also because so many of the Patriarchs lived in Egypt or passed through it.  Indeed, Egypt is often mentioned in the sacred Scriptures.  In this land, God spoke and “revealed his name to Moses” (JOHN PAUL II, Welcome Ceremony, 24 February 2000: Insegnamenti XXIII, 1 [2000], 248), and on Mount Sinai he entrusted to his people and to all humanity the divine Commandments.  On Egyptian soil the Holy Family of Jesus, Mary and Joseph found refuge and hospitality.

The generous hospitality shown more than two thousand years ago remains in the collective memory of humanity and is a source of abundant blessings that continue to expand.  As a result, Egypt is a land that in some sense we all feel to be our own!  As you say, “Misr um al-dunya” – “Egypt is the mother of the world”.  Today too, this land welcomes millions of refugees from different countries, including Sudan, Eritrea, Syria and Iraq, refugees whom you make praiseworthy efforts to integrate into Egyptian society.

Thanks to its history and its particular geographical location, Egypt has a unique role to play in the Middle East and among those countries seeking solutions to pressing and complex problems that need to be faced now in order to avoid the spread of worse violence.  I am speaking of the blind and brutal violence caused by different factors: sheer desire for power, the arms trade, grave social problems and that religious extremism which uses the Holy Name of God to carry out unprecedented atrocities and injustices.

This destiny and role of Egypt are also the reason that led the people to call for an Egypt where no one lacks bread, freedom and social justice.  Certainly this aim will become a reality if all are willing, together, to turn words into actions, authentic aspirations into commitments, written laws into enforced laws, by drawing on the innate genius of the Egyptian people.

Egypt thus has a singular task, namely, to strengthen and consolidate regional peace even as it is assaulted on its own soil by senseless acts of violence.  Such acts of violence have caused unjust suffering to so many families – some of them are present among us – who mourn their sons and daughters.

I think in a particular way of all those individuals who in recent years have given their lives to protect your country: young people, members of the armed forces and police, Coptic citizens and all those nameless victims of various forms of terrorist extremism.  I think also of the murders and the threats that have led to an exodus of Christians from northern Sinai.  I express my gratitude to the civil and religious authorities and to all those who have offered welcome and assistance to these persons who have suffered so greatly.  I also think of the victims of the attacks on Coptic churches, both last December and more recently in Tanta and Alexandria.  To the members of their families, and to all of Egypt, I offer my heartfelt condolences and my prayers that the Lord will grant speedy healing to the injured.

I can only encourage the bold efforts being made to complete a number of national projects and the many initiatives of peace-making, both within the country and beyond its borders, aimed at that development in prosperity and peace which its people desire and deserve.

Development, prosperity and peace are essential goods that merit every sacrifice.  They are also goals that demand hard work, conviction and commitment, adequate planning and, above all, unconditional respect for inalienable human rights such as equality among all citizens, religious freedom and freedom of expression, without any distinction (cf. Universal Declaration of Human Rights; Egyptian Constitution of 2014, Chapter 3) .  Goals, too, that require special consideration for the role of women, young people, the poor and the sick.  Ultimately, true development is measured by concern for human beings, who are the heart of all development: concern for their education, health and dignity.  The greatness of any nation is revealed in its effective care of society’s most vulnerable members – women, children, the elderly, the sick, the disabled and minorities – lest any person or social group be excluded or marginalized.

In the fragile and complex situation of today’s world, which I have described as “a world war being fought piecemeal”, it needs to be clearly stated that no civilized society can be built without repudiating every ideology of evil, violence and extremism that presumes to suppress others and to annihilate diversity by manipulating and profaning the Sacred Name of God.  Mr President, you have spoken of this often and on various occasions, with a clarity that merits attention and appreciation.

All of us have the duty to teach coming generations that God, the Creator of heaven and earth, does not need to be protected by men; indeed, it is he who protects them.  He never desires the death of his children, but rather their life and happiness.  He can neither demand nor justify violence; indeed, he detests and rejects violence (“God… hates the lover of violence”: Ps 11:5).  The true God calls to unconditional love, gratuitous pardon, mercy, absolute respect for every life, and fraternity among his children, believers and nonbelievers alike.

It is our duty to proclaim together that history does not forgive those who preach justice, but then practice injustice.  History does not forgive those who talk about equality, but then discard those who are different.  It is our duty to unmask the peddlers of illusions about the afterlife, those who preach hatred in order to rob the simple of their present life and their right to live with dignity, and who exploit others by taking away their ability to choose freely and to believe responsibly.  It is our duty to dismantle deadly ideas and extremist ideologies, while upholding the incompatibility of true faith and violence, of God and acts of murder.

History instead honours men and women of peace, who courageously and non-violently strive to build a better world: “Blessed are the peacemakers, for they will be called children of God” (Mt 5:9).

Egypt, in the days of Joseph, saved other peoples from famine (cf. Gen 47:57); today it is called to save this beloved region from a famine of love and fraternity.  It is called to condemn and vanquish all violence and terrorism.  It is called to pour out the grain of peace upon all hearts that hunger for peaceful coexistence, dignified employment and humane education.  Egypt, in building peace and at the same time combatting terrorism, is called to give proof that “al-din lillah wal watan liljami” – religion belongs to God and the nation to all”, as the motto of the Revolution of 23 July 1952 states.  Egypt is called to demonstrate that it is possible to believe and live in harmony with others, sharing with them fundamental human values and respecting the freedom and the faith of all (cf. Egyptian Constitution of 2014, Article 5).  Egypt has a special role to play in this regard, so that this region, the cradle of the three great religions, can and indeed will awake from the long night of tribulation, and once more radiate the supreme values of justice and fraternity that are the solid foundation and the necessary path to peace (cf. Message for the 2014 World Day of Peace, 4).  From great nations, one can expect no less!

This year marks the seventieth anniversary of diplomatic relations between the Holy See and the Arab Republic of Egypt, which was one of the first Arab countries to establish such relations.  Those relations have always been characterized by friendship, esteem and reciprocal cooperation.  It is my hope that my Visit may help to consolidate and strengthen them.

Peace is a gift of God, but also the work of man.  It is a good that must be built up and protected, respecting the principle that upholds the force of law and not the law of force (cf. Message for the 2017 World Day of Peace, 1).  Peace for this beloved country!  Peace for this whole region, and particularly for Palestine and Israel, for Syria, for Libya, Yemen, for Iraq, for South Sudan.  Peace to all people of good will!

I would like to greet with affection and a paternal embrace all the Egyptian people, who are symbolically present in this hall.  I also greet my Christian sons and daughters, and brothers and sisters, who live in this country: Coptic Orthodox, Greek Byzantines, Armenian Orthodox, Protestants and Catholics.  May Saint Mark, the evangelizer of this land, watch over you and help all of us to build and achieve the unity so greatly desired by our Lord (cf. Jn 17:20-23).  Your presence in this, your country, is not new or accidental, but ancient and an inseparable part of the history of Egypt.  You are an integral part of this country, and over the course of the centuries you have developed a sort of unique rapport, a particular symbiosis, which can serve as an example to other nations.  You have shown, and continue to show, that it is possible to live together in mutual respect and fairness, finding in difference a source of richness and never a motive of conflict (cf. BENEDICT XVI, Post-synodal Apostolic Exhortation Ecclesia in Medio Oriente, 24 and 25).

Thank you for your warm welcome.  I ask the Almighty and One God to fill all the Egyptian people with his divine blessings.  May he grant peace and prosperity, progress and justice to Egypt, and bless all her children!