Pope: Christians are called to be witnesses of obedience 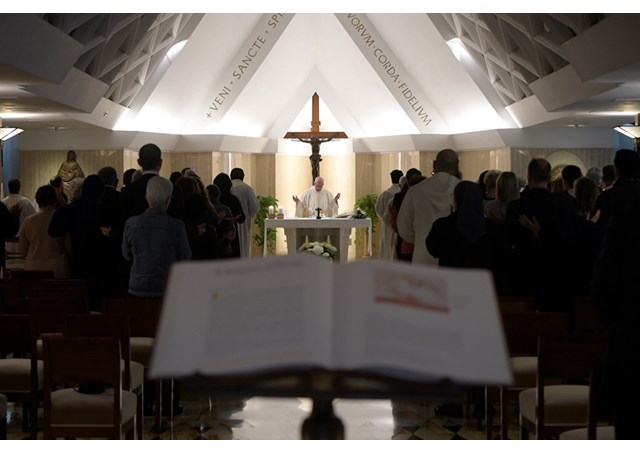 (Vatican Radio) Pope Francis on Thursday reflected on the fact that being Christian is not a social status.Speaking during the homily at the Mass in the Casa Santa Marta the Pope said Christians must be witnesses of obedience to God, like Jesus was.

Recalling the reading of the day Pope Francis quoted Peter’s words before the Sanhedrin when he  said “You must obey God rather than men."

Peter and the Apostles had been freed from prison by an Angel, and forbidden to teach in Jesus’s name

And yet the high priest said “You have filled Jerusalem with your teaching and want to bring this man's blood upon us”.

In order to better understand this event the Pope also referred to the Book of Acts regarding the early months of the Church  which describes a growing Christian community and many miracles.

There was the faith of the people, he said, but there were also “wily” people trying to take advantage of the situation and “wanting to make a career for themselves” like Hananiah and Sapphira.

The same kind of dynamics take place today, the Pope noted, and there are those who despise “God’s faithful people.”

Turning back to the reading of today, the Pope said that Peter, who out of fear had betrayed Jesus on Holy Thursday, this time courageously answered  the high priest saying that “we must obey God rather than men."

This answer, he said, makes it clear that "a Christian is a witness of obedience" as Jesus was, when in the garden of Gethsemane, he addressed these words to the Father: “not my will but yours be done”.

"The Christian is a witness of obedience; if we are not on this path and growing in our witness we are not Christians. We must at least walk this way” he said.

The Pope pointed out that “Jesus is not the testimonial of an idea, of a philosophy, of a company, of a bank or of power: he is a testimonial of obedience”.

However, Francis explained, to become a “witness of obedience” we need the "grace of the Holy Spirit".

The Pope said it is a grace we must ask for: “Father,  Lord Jesus, send me your Spirit so that I may become a witness of obedience, that is, a Christian.”

Francis also said that to be witnesses of obedience implies consequences, as narrated by the First reading; in fact, after Peter's response, the high priests wanted to put him to death:

"Persecutions were the consequences of this witness of obedience. When Jesus lists the Beatitudes he ends with the words ‘Blessed are you when they insult you and persecute you’” he said.

Pope Francis concluded his homily saying that in order to be witnesses of obedience like Jesus, it is necessary to pray, to recognize that we are sinners with much “worldliness” in our hearts and to ask God for the grace of becoming witnesses of obedience" and to not be afraid when we are insulted and persecuted "because as the Lord said: the Spirit will tell us what to answer."