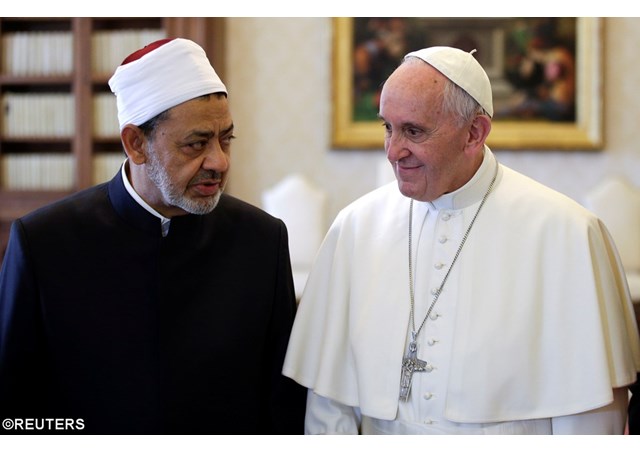 (Vatican Radio) Pope Francis on Friday travels to Cairo to meet with Sheik Ahmed el-Tayeb, Grand Imam of Egypt’s al-Azhar university. The pope will spend just over 24 hours in the Egyptian capital, where he’ll also meet with the head of the Coptic Orthodox Church, Pope Tawadros II and leaders of the small Catholic community there.

At al-Azhar university Pope Francis will speak at an international peace conference which the Ecumenical Patriarch Bartholomew is also be attending. His visit to the prestigious Islamic institution comes just two months after the resumption of talks between the university and a Vatican delegation.

Professor Gabriel Said Reynolds teaches Islamic Studies and Theology at the University of Notre Dame in the United States and was a member of the Catholic delegation for the talks at al-Azhar in February, which came after years of tension and mistrust between the two sides.

Philippa Hitchen spoke to Professor Reynolds to find out more about the impact of the pope’s visit in the context of this new phase of Catholic-Muslim relations….

Professor Reynolds says the al-Azhar delegation was “remarkably eager to restart the conversations” with the Vatican, following the “complications” which date back to the bombing on Dec 31st 2010 in Alexandria. Since the election of Pope Francis, he says, there has been “a real warning of relationships between a number of different Islamic institutes and the Vatican, and this is one sign of that warming”.

During the February meeting, he says, al-Azhar showcased their efforts “to combat the propaganda of extremist groups, notably ISIS or Daesh, in the Islamic world”. He says it was “a real opportunity” to show that while the West often claims that Muslims don't stand up to extremism, “al-Azhar was making point that we’re doing just that”.

Participants at the meeting emphasized the work of an institution known as the ‘al-Azhar Observer’ which is active in social media in combatting propaganda of ISIS and others. Reynolds says the Muslim side voiced encouragement to the Vatican “to continue efforts to reach out to people in the West about welcoming Muslim migrants, in Europe and elsewhere”, while the Vatican side urged al-Azhar “to speak out about the rights of Christian minorities in the Islamic world”.

Prestige of al-Azhar in Islamic world

Commenting on the authority of al-Azhar within the Islamic world, he notes that, unlike the Catholic Church, there is no centralized figure or teaching body, so “al-Azhar relies on politics and the power of persuasion” which is “linked to prestige within the Sunni Islamic world”. Historically, he says, it’s been one of the most prestigious institutions, founded in 10th or 11th century. But in recent years “some parties of the Islamic world [who] consider al-Azhar to be one voice among many, while there are also concerns about relations between al-Azhar and the Egyptian government, as well as the “rise of a more conservative Salafi Islam which looks to other sources of authority and sees al-Azhar as not rigorous enough in their approach to Islamic law”.

In this context, Reynolds continues, Pope Francis’ willingness to travel to Cairo, to the heart of the Islamic world is “enormously important”, allowing al-Azhar to “help amplify the pope’s voice and his message about interreligious dialogue, about authentic religion supporting path of peace”. When those messages come only from the pope speaking from Rome or elsewhere in Europe, he says, “they can only reach a certain audience, but when they come from Cairo, alongside Sheik Ahmed el-Tayeb , Grand Imam of al-Azhar, then a lot more people will listen”.

Visit "could not come at a better time"

Finally Professor Reynolds speaks about the tense situation in Cairo after the twin bombings on Palm Sunday, the latest in a series of unprovoked attacks on innocent Christians. While Christians initially welcomed the election of President al-Sisi , he says now there is “great anxiety that he hasn't been able to protect the Christian community”. On other side, Reynolds adds, there’s also internal tension at the heart of the Islamic community in Egypt,  so the pope’s visit “could not come at a better time, because of the turmoil now, a voice of peace and moderation is sorely needed”.