Pope: The Spirit makes us free, without compromise, rigidity 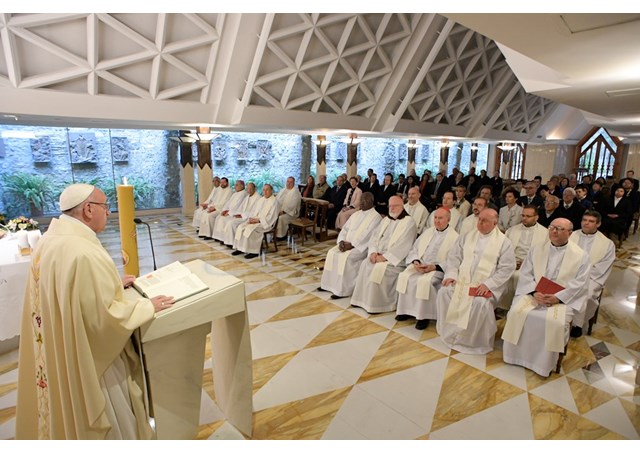 (Vatican Radio) Never forget that our faith is concrete, and rejects compromises and idealizations. That was the message of Pope Francis at the morning Mass at the Casa Santa Marta.

Among those present at the Mass were the Cardinal counselors of the C-9, who are meeting with the Holy Father on Monday. The Pope reflected on the liberty the Holy Spirit gives us, which brings about the proclamation of the Gospel without compromises or rigidity.

Following the Easter break, Pope Francis on Monday resumed his regular morning Masses, focusing his homily on the Gospel account of Jesus’ meeting with Nicodemus. The Holy Father said that Jesus, with love and patience, explained to Nicodemus that he must be “born from above… born of the Holy Spirit.”

To understand this better, the Pope said, one can consider the first Reading, taken from the Acts of the Apostles. Peter and John have healed a crippled man, and the doctors of the Law don’t know what to do, how “to hide” what happened, “because the event was public.” When they were questioned, Peter and John “answered with simplicity”; and when they were ordered not to speak about what happened, Peter responded, “No! We cannot remain silent about what we have seen and heard. And we will continue to do as we have been doing.”

The Word became flesh; our faith is concrete

“At times we forget that our faith is concrete: the Word was made flesh; it is not made an idea. And when we recite the Creed, everything we say is concrete: ‘I believe in God the Father, Who made heaven and earth; I believe in Jesus Christ Who was born, Who died…’ These are all concrete things. Our Creed does not say, ‘I have to do this, I have to do that, I have to do something else, or that some things are for these ends.’ No! They are concrete things. [This is] the concreteness of the faith that leads to frankness, to bearing witness even to the point of martyrdom, which is against compromises or the idealization of the faith.”

At times, even the Church has fallen into “a theology of ‘yes you can,’ ‘no you can’t”

For these doctors of the law, he continued, the Word “was not made flesh: it was made law: and you must do this up to this point, and no further”; “you must do this, and nothing else”:

“And so they were imprisoned in this rationalistic mentality, which did not end with them. Because in the history of the Church – although often the Church Herself has condemned rationalism, illuminism – later it often happened that it fell into a theology of ‘yes, you can, no you can’t; up to this point, thus far.’ And it forgot the strength, the liberty of the Spirit, this rebirth of the Spirit that gives you liberty, the frankness of preaching, the proclamation that Jesus Christ is Lord.”