Vatican's message to Buddhists on Vesakh 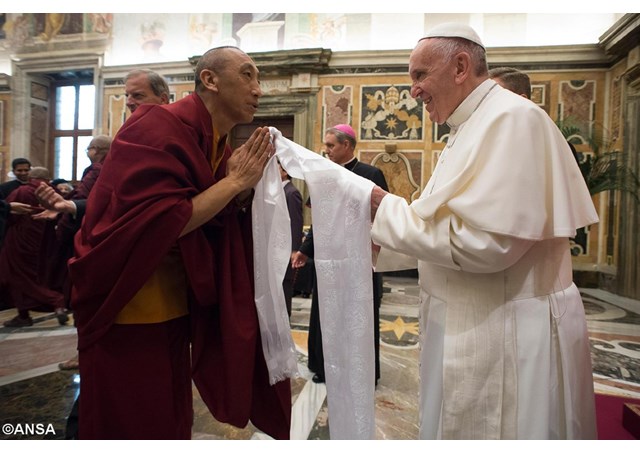 The Pontifical Council for Interreligious Dialogue on Saturday, issued a message on the occasion of the Buddhist feast of Vesakh on the theme ‘Christians and Buddhists: Walking Together on the Path of Nonviolence’.

The Message signed by Council President, Cardinal Jean-Louis Tauran and Council Secretary, Fr Miguel Ángel Ayuso Guixot, MCCJ emphasizes the urgent need to promote a culture of peace and nonviolence as both these values were promoted by Jesus Christ and the Buddha.

The text reiterates how Jesus walked the path of nonviolence to the very end, to the cross and calls his followers  today to embrace his teaching about nonviolence.  Buddha also heralded the same message and encouraged all to overcome the angry by non-anger; overcome the wicked by goodness; overcome the miser by generosity; overcome the liar by truth.

Therefore the message calls for a  common enterprise, to study the causes of violence, combat violence  and to pray for world peace while walking together on the path of nonviolence.

The full text of the message is here below:

MESSAGE FOR THE FEAST OF VESAKH

1.       In the name of the Pontifical Council for Interreligious Dialogue, we extend our warmest greetings and prayerful good wishes on the occasion of Vesakh. May this feast bring joy and peace to all of you, to your families, communities and nations.

2.       We wish to reflect this year on the urgent need to promote a culture of peace and nonviolence. Religion is increasingly at the fore in our world today, though at times in opposing ways. While many religious believers are committed to promoting peace, there are those who exploit religion to justify their acts of violence and hatred. We see healing and reconciliation offered to victims of violence, but also attempts to erase every trace and memory of the “other”; there is the emergence of global religious cooperation, but also politicization of religion; and, there is an awareness of endemic poverty and world hunger, yet the deplorable arms race continues. This situation requires a call to nonviolence, a rejection of violence in all its forms.

3.       Jesus Christ and the Buddha were promotors of nonviolence as well as peacemakers. As Pope Francis writes, “Jesus himself lived in violent times. Yet, he taught that the true battlefield, where violence and peace meet, is the human heart: for ‘it is from within, from the human heart, that evil intentions come’ (Mk 7:21)” (2017 Message for the World Day of Peace, Non-Violence: A Style of Politics for Peace, no. 3). He further emphasises that “Jesus marked out the path of nonviolence. He walked that path to the very end, to the cross, whereby he became our peace and put an end to hostility (cf. Eph 2:14-16)” (ibid.). Accordingly, “to be true followers of Jesus today also includes embracing his teaching about nonviolence” (ibid.).

4.       Dear friends, your founder, the Buddha also heralded a message of nonviolence and peace. He encouraged all to “Overcome the angry by non-anger; overcome the wicked by goodness; overcome the miser by generosity; overcome the liar by truth.” (Dhammapada, no. XVII, 3). He taught further that “Victory begets enmity; the defeated dwell in pain. Happily the peaceful live, discarding both victory and defeat.” (ibid. XV, 5). Therefore, he noted that the self-conquest is greater than the conquest of others: “Though one may conquer a thousand times a thousand men in battle, yet he indeed is the noblest victor who conquers himself” (ibid, VIII, 4).

5.       In spite of these noble teachings, many of our societies grapple with the impact of past and present wounds caused by violence and conflicts. This phenomenon includes domestic violence, as well as  economic, social, cultural and psychological violence, and violence against the environment, our common home. Sadly, violence begets other social evils, and so “the choice of nonviolence as a style of life is increasingly demanded in the exercise of responsibility at every level […] ” (Address of His Holiness Pope Francis on the Occasion of the Presentation of the Letters of Credence, 15 December 2016).

6.      Though we recognize the uniqueness of our two religions, to which we remain committed, we agree that violence comes forth from the human heart, and that personal evils lead to structural evils. We are therefore called to a common enterprise:  to study the causes of violence: to teach our respective followers to combat evil within their hearts;  to liberate both victims and perpetrators of violence from evil; to bring evil to light and challenge those who foment violence;  to form the hearts and minds of all, especially of children, to love and live in peace with everyone and with the environment; to teach that there is no peace without justice, and no true justice without forgiveness; to invite all to work together in  preventing  conflicts and rebuilding broken societies;  to urge the media to avoid and counter hate speech, and biased and provocative reporting; to encourage educational reforms to prevent the distortion and misinterpretation of history and of scriptural texts;  and to pray for world peace while walking together on the path of nonviolence.

7.       Dear friends, may we actively dedicate ourselves to promoting within our families, and social, political, civil and religious institutions a new style of living where violence is rejected and the human person is respected. It is in this spirit that we wish you once again a peaceful and joyful feast of Vesakh!