Testimonies of family and friends of the "New Martyrs" 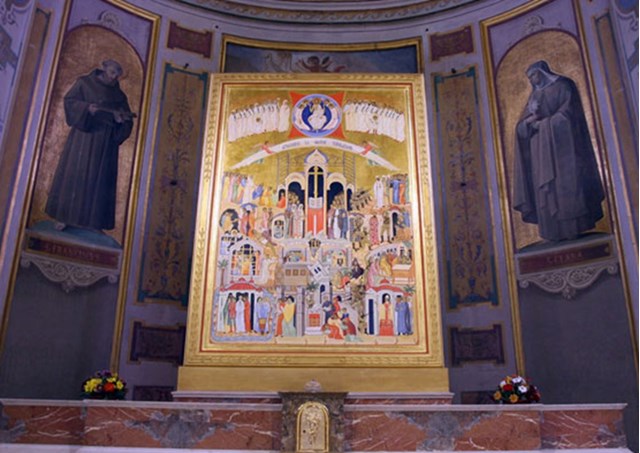 (Vatican Radio) Pope Francis’ visit to the Basilica of Saint Bartholomew on the Tiber Island (San Bartolomeo all’Isola) featured a Liturgy of the Word for the Vigil of the “New Martyrs” of the 20th and 21st centuries.

During the Liturgy, family members and friends of three of the many new “witnesses of the faith” offered their testimonies about the witness of their loved ones: Karl Schneider, the son of Reformed Church pastor Paul Schneider, who was killed in Nazi concentration camp at Buchenwald; Roselyne, the sister of Fr Jacques Hamel, killed by radical Islamists in France last year; and Francisco Hernandez Guevara, a friend of William Quijano, killed in El Salvador in 2009. Mementos of all three martyrs are preserved by the Sant’ Egidio Community at the Basilica.

Karl Schneider said his father Paul worked to maintain “a Christian orientation” in German society during the Nazi era. Paul Schneider, he said, was killed because he knew that the goals of National Socialism were irreconcilable with the words of the Bible.

Despite his age – he was 85 years old when he was murdered – Père Jacques Hamel was “strong in his faith in Christ, strong in his love for the Gospel and for the people” – including, his sister said, even his murderers.

Finally, William Quijano, who organized “Schools for Peace” in El Salvador, “never spoke of repression or revenge against the violent gangs in his country. His friend, Francisco Guevara, said Quijano “never gave up teaching peace… His commitment broke the chain of violence.”

Below, please find the prepared testimonies of the family and friends of the “new martyrs”:

I want to offer heartfelt thanks for the great honour you paid today to my father Paul Schneider, and for the fact that my daughter and I are able to be here.

My father was killed in 1939 at the Buchenwald concentration camp because for him the goals of National Socialism were irreconcilable with the words of the Bible. The Church has the task of watching over the State. With this conviction, my father strongly opposed any attempt to influence the Church politically. He committed himself so that the German people might maintain a Christian orientation in the state and in society.

All of us, even today, make too many compromises, but my father remained faithful only to the Lord and to the faith. He was a shepherd and a spiritual guide – even in the concentration camp! Until the end, whenever possible, despite torture and suffering, he cried with courage from the window of his cell in the bunker words of consolation and hope of the Bible to other prisoners. This is why he was called “the Preacher of Buchenwald.”

And he did not forget us, his family. In a letter from the concentration camp kept in this church, my father strongly affirms his faith in the Easter victory of life. And he writes knowing that my mother, I, my brothers and sisters, are also under the protection of God. My mother's words, even when she was very old, were: “He was chosen to proclaim the Gospel and this is my consolation.” I, as his son, feel this consolation to this day.

Lector: And all the angels stood round the throne and round the elders and the four living creatures, and they fell on their faces before the throne and worshiped God, saying, “Amen! Blessing and glory and wisdom and thanksgiving and honor and power and might be to our God for ever and ever! Amen.” Then one of the elders addressed me, saying, “Who are these, clothed in white robes, and whence have they come?” I said to him, “Sir, you know.” And he said to me, “These are they who have come out of the great tribulation; they have washed their robes and made them white in the blood of the Lamb.”

Holy Father, last year, on July 26, my brother, Jacques Hamel, was killed at the end of the Mass he had just celebrated at Sant’Etienne de Rouvray in Normandy.

Jacques was 85 years old when two young men, radicalized by hate speech, thought they would commit a heroic act by turning murderous violence. At his age Jacques was frail, but he was also strong. Strong in his faith in Christ, strong in his love for the Gospel and for the people, whoever they might be – and, I’m certain, for his killers as well.

As your Holiness said in memory of Jacques, in this difficult time he did not lose his presence of mind when, from the altar, he accused the true author of the persecution: “Begone Satan!” Truly, “killing in the name of God is always satanic.”

His death is in line with his priestly life, which was a “given” life: a life offered to the Lord when he said “yes” at the time of his ordination, a life serving the Gospel, a life given to the Church and for the people, especially for the poorest, whom he always served on the outskirts of Rouen. There is a paradox: he who never wanted to be spotlight bore witness to the entire world, [a witness] whose cannot yet be measured.

We have lived the reaction of all those Christians who have not yet preached revenge or hatred, but love and forgiveness; we have seen it in the solidarity of Muslims who wanted to visit the Sunday assemblies after his death; we have seen it in France, which has shown its unity around the tenderness for this priest. For us, his family, there is surely pain and emptiness. But it is a great comfort to see how many new encounters, how much solidarity, and how much love has been generated by Jacques’s witness. As he wrote, “Our vocation is to participate in building a new fraternity in a new world context.”

Yes, Jacques, my brother, with his life wanted to live as a brother with all those who had been entrusted to him; with his death he became to all. Last September we accompanied Jacques’ breviary which is now preserved in this Basilica, and we are deeply grateful for the memory of the witnesses of the faith here and for the solidarity [we experienced]. May Jacques’ sacrifice bear fruit, that men and women of our time might find the way to live together in peace.

Holy Father, my name is Francisco Guevara, and I come from El Salvador in Central America. I am absolutely certain: Love and friendship enlarge the heart; William, too, had a heart enlarged by hope, and this was his strength. He loved life, and in his friendly way he attracted many young people and children to the “School of Peace.”

What was his crime? He dreamed of a world of peace.

William never gave up teaching peace; indeed his commitment broke the chain of violence. He said, “The world is full of violence, so we must work for peace, beginning with children. We must have the courage to be teachers, because a country without schools or teachers is a country without a future and without hope. The Schools of Peace are sanctuaries that place a barrier in the way of violence and poverty. Security is not only achieved with firmness, but with love.” He spoke to everyone about his dream: “We have the heart [anime], the intelligence and the strength to put ourselves to work. And prayer will sustain us.”

It is surprising that William never spoke of repression or revenge against maras (as the gangs are called Salvador), but insisted on the need for a change of mindset. For everyone. In the children, first of all; and he sought to give them affection in order to show that with the study they could progress, they could have a future – [but he also saw the need for a change in attitude] in young people, in adults.

What happened to William, although it is tragic, makes us believe that another Latin America can be built, free from the nightmare of the maras. In the existential periphery, William bore witness to his hope in a different world, based on the Gospel and on more human values, on the centrality of closeness. This is the great gift of the small life of William Alfredo Quijano Zetino, my friend.