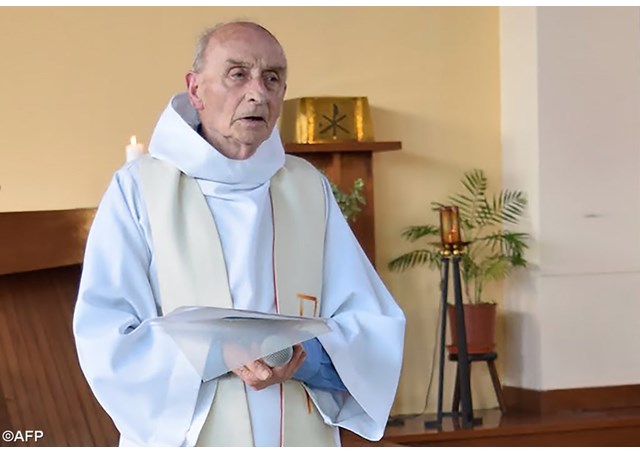 (Vatican Radio) Pope Francis will celebrate a Liturgy of the Word in memory of the martyrs of the 20th and 21st centuries on Easter Saturday.

The commemoration is to take place in the Rome Basilica of St. Bartholomew together with members of the Community of Sant’Egidio who look after the Basilica’s Shrine to the memory of modern martyrs.

In a statement Sant’Egidio remarked that the event takes on a very special significance in times marked by the suffering of so many Christians in the world, and in the light of Easter.

St. Bartholomew is not a parish Church but, as per the request of Saint Pope John Paul II in 1999, it serves as a shrine to men and women who died in defense of their faith during totalitarian regimes and Latin American dictatorships as well as more recent martyrs of terrorism.

During the course of the liturgy friends and relatives of some modern martyrs will give testimonies. They include Karl Schneider, son of Paul, the Reformed Church Pastor killed in the nazi concentration camp Buchenwald in 1939 for having described the objectives of nazi Germany as “irreconcilable with the words of the Bible”; Roselyne, sister of Father Jacques Hamel, assassinated in Rouen, France, on 26 July  last year while celebrating Holy Mass, and  Francisco Hernandez Guevara, friend of William Quijano, a young member of the Sant’Egidio Community in Salvador who was killed in 2009 while working to keep young people away from criminal rings.

After the homily, Pope Francis will pay tribute to the six chapels in the Basilica where the relics of the martyrs are kept. During the liturgy a candle will be lit for every prayer recited in their memory. These include Armenians and other Christians who were victims of massacres perpetrated during World War I, martyrs of peace and dialogue like the Trappist monks of Notre Dame de l’Atlas in Algeria, Don Andrea Santoro who was gunned down in Turkey, Don Pino Puglisi who was killed by the Mafia and many many missionaries who lost their lives in defense of their faith.

Well-known names like that of San Salvador bishop Oscar Romero will resonate together with many less famous ones and a special prayer will be said for Mar Gregorios Ibrahim, Paul Yazigi and father Paolo Dall’Oglio, all of them abducted in Syria and of whom all traces have been lost.

After the liturgy Pope Francis will meet with a group of refugees who have found welcome in Rome thanks to the “humanitarian corridors” project promoted by Sant’Egidio, with women victims of human trafficking and with young migrants who have travelled to Italy unaccompanied.