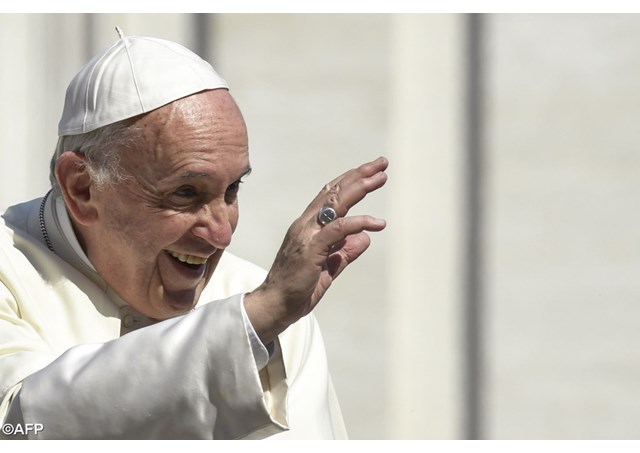 (Vatican Radio)  Pope Francis granted an interview with the Italian newspaper, La Repubblica, published Thursday morning, in which he spoke about why he always celebrates the Mass of the Lord's Supper with prisoners and about the current “terrible world war being fought piecemeal”.

This year, the Holy Father celebrates the Mass of the Lord’s Supper on Holy Thursday at the Paliano Detention Centre, near Rome, where he will once again wash the feet of prisoners on the margins of society.

The Pope said his decision to continue to celebrate the In Coena Domini Mass with prisoners “is a duty which comes from my heart.”

“The Gospel passage of the last judgment says, ‘I was a prisoner and you visited me’. This is Jesus’ task for each of us, but especially for the bishop who is the father of all.”

When asked who had taught him this lesson, Pope Francis cited the example of the late Cardinal Agostino Casaroli.

He said that even when he was Vatican Secretary of State, Cardinal Casaroli continued to carry out his pastoral activity at Rome’s youth detention facility, Casal del Marmo, unbeknownst to those to whom he was ministering.

“Every Saturday evening he would disappear: ‘He’s resting’, they would say. He would take the bus, with his work briefcase, and would stay to confess young people and play with them. They called him ‘Don Agostino’; they didn’t really know who he was. When John XXIII received him after his first visit to Eastern Europe during his diplomatic mission at the height of the Cold War, he asked him at the end of their meeting: ‘Tell me, do you still visit those young people?’ ‘Yes, Holy Father.’ ‘I ask you this favor, never abandon them.’”

The Holy Father went on to say, “At times, a certain hypocrisy pushes us to see prisoners only as people who have messed up, for whom the only path is prison. But, we all have the possibility to make mistakes.”

World must stop lords of war

Turning to the theme of war and violence, Pope Francis said, “I think today sin is manifested with all its destructive force in war, in different forms of violence and mistreatment, and in the rejection of the most fragile.”

He said the last century “was devastated by two deadly world wars and knew the threat of nuclear war and a large number of other conflicts, while today, unfortunately, we are experiencing a terrible world war fought piecemeal.”

The Holy Father told his interviewer, “The world must stop the lords of war, because those who suffer most are the last and the helpless.”

“I always ask myself,” he said, “Does violence allow us to obtain long-lasting objectives? Are not the results only a further escalation of reprisals and a spiral of lethal conflicts, which benefit only ‘a few lords of war?’”

Pope Francis said, “Responding to violence with violence leads – in the best of cases – to forced migration and inhuman suffering... In the worst of cases, in can bring the physical and spiritual death of many people, if not of all.”

Prejudices close one to truth and freedom

In conclusion, the Pope returned to his evening visit to prisoners at the Paliano Detention Centre.

“When we remain closed in our own prejudices, when we are slaves to idols of a false well-being, when we move within ideological frames, or when we absolutize economic laws which crush people, in reality we are doing nothing other than remaining within the cramped cell walls of individualism and self-sufficiency, deprived of truth which generates freedom. And to point the finger against someone who has messed up cannot become an alibi for hiding one’s own contradictions.”