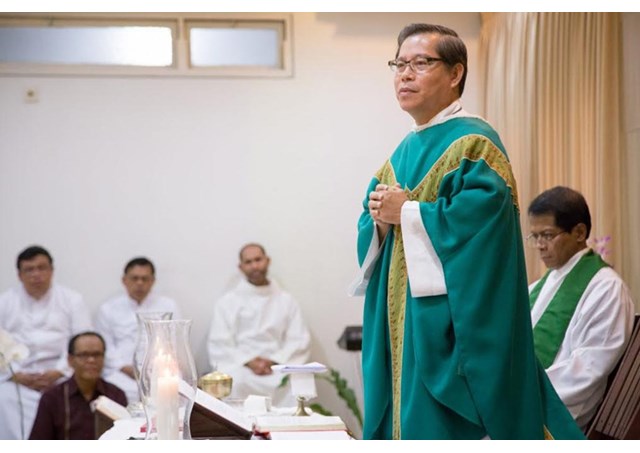 Pope Francis on Wednesday appointed a new bishop to the Diocese of Manado, in the North Sulawesi province of Indonesia.   The new bishop is the Provincial of the Missionaries of the Sacred Heart (M.S.C.) in Indonesia, Father Benedictus Estephanus Rolly Untu.   ‎The Pope appointed the 60-year old priest after Bishop Joseph Theodorus Suwatan, M.S.C., stepped down two days after reaching the age of 77.  According to the Church’s Canon Law, the normal retirement age of a bishop is 75, but if needs be, the Pope could ask him to continue.

Bishop-designate Fr. Untu was born on 4 January, 1957 in ‎Lembean, in Manado Diocese. After attending St. Francis Xavier Minor Seminary of Kakaskasen, he completed his philosophical and theological studies at the Sacred Heart Major Seminary of Pineleng.  After his perpetual vows as a Missionary of the Sacred Heart on 15 January, 1983, Fr. Untu was ordained a priest on 29 June, the same year.

Manado Diocese, a suffragan of the ecclessiastical territory of Makkassar, became a diocese in 1961.   It caters to the pastoral needs of some 138,000 Catholics out of a total population of over 5.9 million spread across a vast territory of over 90,000 sq.km.  Manado Diocese has 63 parishes with 139 priests, 176 nuns and 59 seminarians.

After his ordination, Fr. Untu was assigned the following responsibilities:

‎1995-2005:‎      Formator of M.S.C. scholastics and professor at the Sacred Heart Major Seminary, Pineleng, Manado; member of the presbyterial council and of the College of Concultors of Manado Diocese.