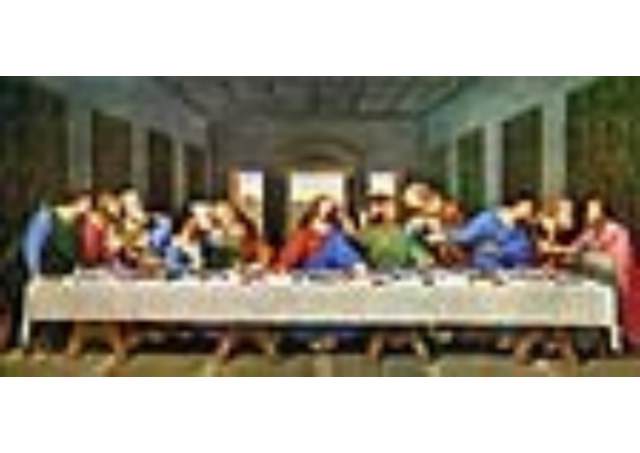 The Stole and the Towel is the title of a book, which sums up the message of the Italian bishop, Tony Bello, who died of cancer at the age of 58.  On Maundy Thursday of 1993, while on his deathbed, he dictated a pastoral letter to the priests of his diocese.  He called upon them to be bound by "the stole and the towel."  The stole symbolizes union with Christ in the Eucharist, and the towel symbolizes union with humanity by service.  The priest is called upon to be united with the Lord in the Eucharist and with the people as their servant.  Today we celebrate the institution of both the Eucharist and the priesthood: the feast of "the stole and the towel," the feast of love and service.

Introduction: On Holy Thursday, we celebrate three anniversaries: 1) the anniversary of the first Holy Mass, 2) the anniversary of the institution of ministerial priesthood in order to perpetuate the Holy Mass, convey God’s forgiveness to repentant sinners and  preach the Good News of salvation, 3) the anniversary of the promulgation of Jesus’ new commandment of love: “Love one another as I have loved you” (Jn 13:34). Today we remember how Jesus transformed the Jewish Passover into the New Testament Passover.  In its origins, the Jewish Passover was, in fact, a joint celebration of two ancient thanksgiving celebrations.  The descendants of Abel, who were shepherds, used to lead their sheep from the winter pastures to the summer pastures after the sacrificial offering to God of a lamb.  They called this celebration the “Pass over."  The descendants of Cain, who were farmers, held a harvest festival called the Massoth in which they offered unleavened bread to God as an act of thanksgiving.  The Passover feast of the Israelites (Exodus 12:26-37), was a harmonious combination of these two ancient feasts of thanksgiving, commanded by the Lord God and celebrated yearly by all Israelites to thank God for the miraculous liberation of their ancestors from Egyptian slavery, their exodus from Egypt and final arrival in the Promised Land.

Scripture lessons:  The first reading from Exodus, gives us an account of the origins of the Jewish feast of Passover when the Israelites celebrated God's breaking the chains of their Egyptian slavery and leading them to the land He had given to Abraham, Isaac and Jacob, establishing a covenant with them and making of them his own beloved people. God gave the Hebrews two instructions: prepare for the moment of liberation by a ritual meal [to be held annually in later years] and make a symbolic mark on your homes to exempt yourselves from the coming slaughter. This tradition continued in the Church as the Lord’s Supper, with the Eucharist as its focal point. In the second reading, Paul identifies a source and purpose for the communal celebration of the Lord’s Supper beyond that was passed on to him upon his conversion, namely that   he had received this "from the Lord.” This suggests that the celebration of the Lord's Supper was an unbroken tradition from the very beginning of the Church. Paul implies that another purpose of this celebration was to “proclaim the death of the Lord until He comes again.”  Paul may simply mean that Christians, by this ritual act, remind themselves of the death and Resurrection of Jesus; he may also mean that Christians prepare themselves for the proclamation of Christ to the world at large.  Addressing abuses and misunderstandings concerning the “breaking of the bread” in the Corinthian church, Paul gives us all the warning that if we fail to embrace the spirit of love and servanthood in which the gift of the Eucharist is given to us, then “Eucharist” becomes a judgment against us. In harmony with these readings, today’s Gospel describes how Jesus transformed the Jewish Passover into the Eucharistic celebration.  First, he washed His Apostles’ feet - a tender reminder of his undying affection for them. Then he commanded them to do the same for each other.  The incident reminds us that our vocation is to take care of one another as Jesus always takes care of us. Finally, he gave his apostles his own Body and Blood under the appearances of bread and wine as Food and Drink for their souls, so that, as long as they lived, they'd never be without the comfort and strength of his presence.   Thus, Jesus washed their feet, fed them and then went out to die. This Gospel episode challenges us to become, for others, Christ the healer, Christ the compassionate and selfless brother, Christ the humble “washer of feet.”

Exegesis: Jesus’ transformation of his last Seder meal (Last Supper) into the first Eucharistic celebration is described for us in today’s Second Reading and Gospel. (John in his account of the Last Supper, makes no mention of the establishment of the Eucharist because his theology of the Eucharist is detailed in the “bread of life” discourse following the multiplication of the loaves and fish at Passover, in chapter 6 of his Gospel.) Jesus, the Son of God, began his Passover celebration by washing the feet of his disciples (a service assigned to household servants), as a lesson in humble service, demonstrating that he “came to the world not to be served but to serve.” (Mark 10:45). He followed the ritual of the Jewish Passover meal up to the second cup of wine.  After serving the roasted lamb as a third step, Jesus offered his own Body and Blood as food and drink under the appearances of bread and wine. Thus, he instituted the Holy Eucharist as the sign and reality of God’s perpetual presence with His people as their living, Heavenly Food.  This was followed by the institution of the priesthood with the command, “Do this in memory of me."   Jesus concluded the ceremony with a long speech incorporating his command of love:  “Love one another as I have loved you”(Jn 13:34). Thus, Jesus instituted the Sacrament of the Holy Eucharist at a private Passover meal with his disciples (Matthew 26:17-30; Luke 21:7-23).  He served as both the Host and the Victim of a sacrifice.  He became the Lamb of God, as John the Baptist had previously predicted (John 1:29, 36), who would “take away the sins of the world.”

The transformation of Jesus’ Passover into the Holy Mass: The early Jewish Christians converted the Jewish “Sabbath Love Feast” of Fridays and Saturdays (the Sabbath), into the “Memorial Last Supper Meal” of Jesus on Sundays.  The celebration began with the participants praising and worshipping God by singing psalms, reading the Old Testament Messianic prophecies and listening to the teachings of Jesus as explained by an apostle or by an ordained minister.  This was followed by an offertory procession, bringing to the altar the bread and wine to be consecrated and the covered dishes (meals) brought by each family for a shared common meal after the Eucharistic celebration. Then the ordained minister said the “institution narrative” over the bread and wine and all the participants received the consecrated Bread and Wine, the living Body and Blood of the crucified and risen Jesus.  This ritual finally evolved into the present day Holy Mass in various rites, incorporating various cultural elements of worship and rituals.

Life Messages: 1) We need to render humble service to others.  Our celebration of the Eucharist requires that we wash one another’s feet, i.e., serve one another and revere Christ's presence in other persons.   To wash the feet of others is to love them, especially when they don't deserve our love, and to do good to them, even when they don't return the favor. It is to consider others' needs to be as important as our own. It is to forgive others from the heart, even though they don't say, "I'm sorry." It is to serve them, even when the task is unpleasant. It is to let others know we care when they feel downtrodden or burdened. It is to be generous with what we have. It is to turn the other cheek instead of retaliating when we're treated unfairly. It is to make adjustments in our plans in order to serve others' needs without expecting any reward. In doing and suffering all these things in this way, we love and serve Jesus Himself, as He has loved us and has taught us to do (Mt 25:31-ff).

2) We need to practice sacrificial sharing and self-giving love.  Let us imitate the self-giving model of Jesus who shares with us his own Body and Blood and enriches us with his Real Presence in the Holy Eucharist.  It is by sharing our blessings – our talents, time, health and wealth - with others that we become true disciples of Christ and obey his new commandment: “Love one another as I have loved you” (Jn 13:34).

3) We need to show our unity in suffering. The bread we partake of is produced by the pounding of many grains of wheat, and the wine is the result of the crushing of many grapes.  Both are thus symbols of unity through suffering.  They invite us to help, console, support, and pray for others who suffer physical or mental illnesses.

4) We need to heed the warning: We need to make Holy Communion an occasion of Divine grace and blessing by receiving it worthily, rather than making it an occasion of desecration and sacrilege by receiving Jesus while we are in grave sin.  That is why we pray three times before we receive Communion, "Lamb of God, You take away the sins of the world, have mercy on us," with the final "have mercy on us" replaced by "grant us peace." That is also the reason we pray the Centurion's prayer, "Lord, I am not worthy that you should enter under my roof, but only say the word and my soul shall be healed” (Mt 8:8). And that is why the priest, just before he receives the consecrated Host, prays, "May the Body of Christ keep me safe for eternal life," while, just before drinking from the Chalice, he prays, "May the Blood of Christ keep me safe for eternal life."

5) We need to become Christ-bearers and Christ-conveyers:  In the older English version of the Mass, the final message was, “Go in peace to love and serve one another,” that is, to carry Jesus to our homes and places of work, conveying to others around us the love, mercy, forgiveness and spirit of humble service of Christ whom we carry with us. That message has not changed, though the words are different. (Fr. Anthony Kadavil)