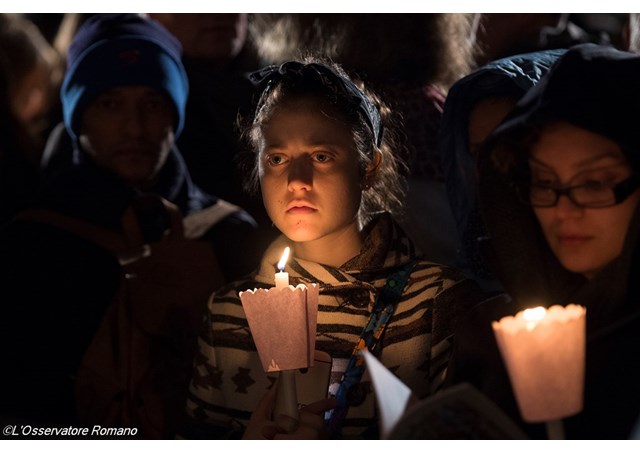 (Vatican Radio) Men and women of goodwill of the diocese of Rome are to walk the ‘Way of the Cross’ in solidarity with all women victims of human trafficking on Friday evening.

During the General Audience on Wednesday Pope Francis invited the faithful to participate in the initiative organized by the Pope John XXIII Community in favour of women and girls who have been rescued from trafficking rings and of those who are still enslaved by the sex trade.

At its third edition, the “Via Crucis for crucified women” aims to raise awareness about the plight of women who trafficked and enslaved for prostitution.

The 7pm rendezvous in Rome’s Garbatella area has been strongly supported by the Diocese of Rome and Rome Auxiliary Bishop Paolo Lojudice.

Fr. Aldo Buonaiuto of the Pope John XXIII Community, organizer and coordinator of this special “Via Crucis” said that the number of women trafficked for prostitution has quadrupled over the past two years.

“Estimates of various monitoring organizations put the numbers of women and girls used in the sex trade in Italy at between 70 and 100 thousand. We believe that this presence is actually multiplied by four due to the continued landings of refugees along our coasts, and we all know that a large percentage of these girls are trafficked for sexual exploitation” he said.

Father Buonaiuto said the shameful trade sees the presence of girls who are younger and younger; most of them, he said, are trafficked from Nigeria and then distributed throughout Europe.

“The huge presence of these innocent girls who are raped on our streets is possible because there is a demand”, changing this culture and discouraging customers, he said, can go a long way in suppressing the offer. That is why raising awareness is crucial.