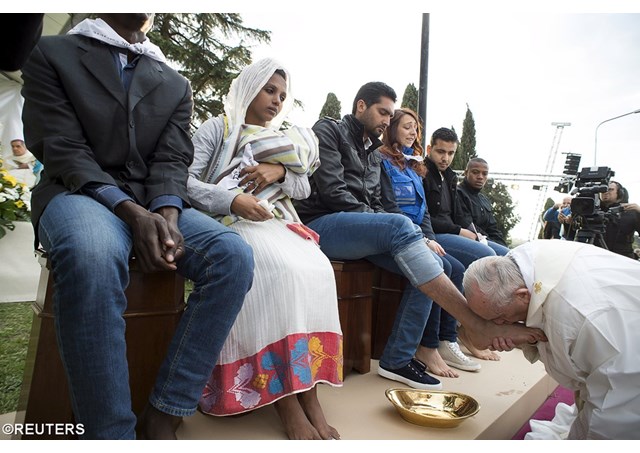 (Vatican Radio) Pope Francis will wash the feet of inmates at Paliano prison, south of Rome, during the Mass of Our Lord’s Supper on Holy Thursday.

The Vatican announced on Thursday that the pope will travel to the penitentiary on the afternoon of April 13th for a private visit and the celebration of Mass marking Jesus’ Last Supper with his disciples on the day before his Crucifixion.

Pope Francis began the tradition of travelling to a prison for the traditional Last Supper Mass in March 2013, just a few days after the inauguration of his pontificate. On that occasion he travelled to Rome’s Casal del Marmo youth detention centre where he included, for the first time, women and Muslims among the inmates whose feet he washed.

The following year, he celebrated the Last Supper Mass at Rome’s Don Gnocchi centre for the disabled, again including women among those who had their feet washed in memory of Jesus’ gesture of humility and service.

In 2015 Pope Francis travelled to Rome’s Rebibbia prison for the Holy Thursday celebration, while last year he washed the feet of refugees, including Muslims, Hindus and Coptic Orthodox men and women at a centre for asylum seekers in Castelnuovo di Porto, just north of Rome.