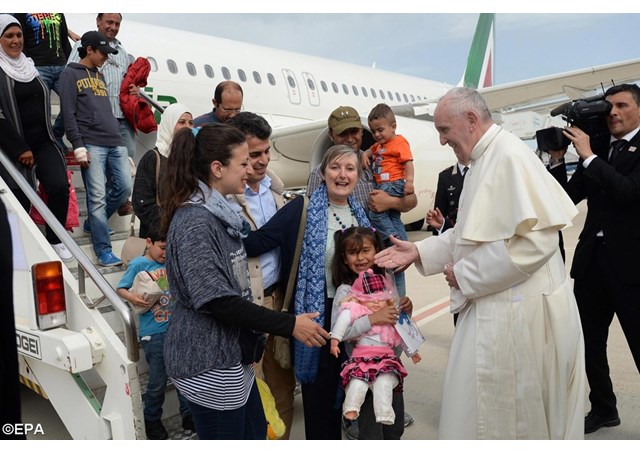 (Vatican Radio) Three new Syrian families have found shelter and welcome in the Vatican as part of an ongoing effort to provide the means and the tools for integration and a new life of hope for those fleeing conflict and persecution.

All in all, thirteen people - from two Christian and one Muslim family - have been able make their homes in three Vatican-owned apartments recently vacated by other refugees who have since moved on to more permanent situations.

According to a communiqué released by the Vatican Press Office, two of the families have fled violence and discrimination because of their Christian faith. They arrived in Italy in March.

The first family is composed of the mother, two adolescent children, the grandmother, an aunt and a Syrian woman who lives with them.

The second family includes a young couple with their two-week old baby daughter, Stella, who was born in the apartment they now live in. The mother had been abducted and in the hands of the so-called Islamic State for many months.

The third family first set foot in Italy in February 2016. It is made up of the parents and two children, one of whom with serious health problems. The children both go to school and the mother is following a University course for Intercultural Mediators.

The refugees hosted in the Vatican have all been able to travel safely to Italy thanks to the “humanitarian corridor” project promoted by the Community of Sant'Egidio, the Federation of Evangelical Churches in Italy and the Waldesian Table.

The project is a concrete response to the appeal launched by Pope Francis on 6 September 2015 during the Angelus when he called on  parishes, religious communities and sanctuaries of all Europe to take in a migrant family.

“Faced with the tragedy of tens of thousands of refugees fleeing death on account of war and hunger, and who are traveling toward a hope for life, the Gospel calls us to be 'neighbors' to the smallest and abandoned, and to give them a concrete hope” he said.
Thanks to the “humanitarian corridors” 70 families have found welcome in Rome, for a total of 145 people.

The main goals of the self-funded project are:

1.    To avoid journeys on the boats in the Mediterranean, which have already caused a high number of deaths, including many children;

2.    To avoid human trafficking, preventing the exploitation of human traffickers who do business with those who flee from wars;

3.    To grant to people in "vulnerable conditions" (victims of persecution, torture and violence, as well as families with children, elderly people, sick people, persons with disabilities) legal entry on Italian territory with humanitarian visa, with the possibility to apply for asylum.

As well as providing adequate housing, the project foresees a process of integration for those involved which includes Italian lessons.

Beyond the hospitality provided, the Holy See also gives economic support to the 21 refugees who came to Italy with Pope Francis from the island of Lesbos, and who have found hospitality in private and religious houses.