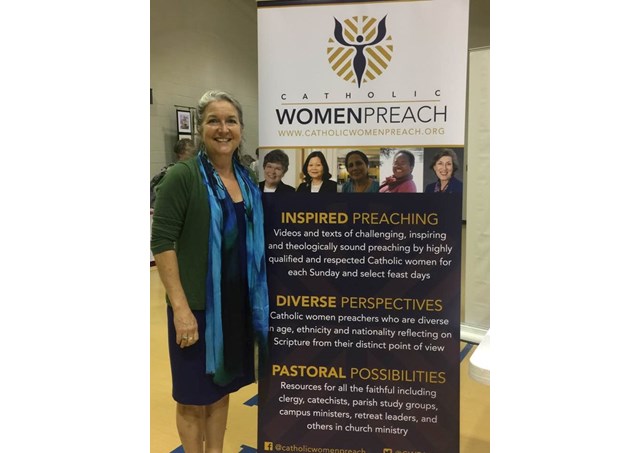 (Vatican Radio) Looking for inspiration for a Holy Week or Easter homily? Searching for a woman’s perspective on these central events of our Christian faith?

Look no further, as a group of Catholic women has launched an innovative website offering regular theological reflections on the readings of the day by leading female scholars and others engaged in many different ministries in countries around the world.

The project is designed to address some of the pressing challenges facing the Church today by responding to Pope Francis’ call for broader and more active engagement of all the baptized in the preaching mission of the Church.

The organisers say the reflections highlight “women traditionally omitted or misrepresented” in the lectionary and “open the Scripture texts to deepen our understanding of God’s saving presence in the world”.

Elizabeth Donnelly is preacher coordinator of the website www.catholicwomenpreach.org  As a trustee of a U.S. based Catholic family foundation, she’s also part of a group of female leaders who have met frequently with top Vatican officials to discuss the role of women in the Church.

She talked to Philippa Hitchen about the project Catholic Women Preach…

Donnelly says she was part of a women’s advisory group of the Woodstock Theological Center at Georgetown University which began, in 2011, to record reflections on designated Scripture readings. She and other colleagues decided to scale that idea up, seeking out talented women, of diverse ages and ethnic backgrounds, to share reflections two weeks in advance of each given date, so that clergy or “anyone seeking spiritual nourishment” can hear a women’s perspective.

While lay people can only give a homily at the Mass “in exceptional circumstances”, she notes,  anyone can preach outside of that context. She points out that it’s becoming more common for lay people to offer reflections after Communion, or for a priest to invite a lay person to reflect on the readings following his own homily.

Donnelly says if the permanent deaconate is opened up to women, they’ll regularly be able to preach  in the liturgy, as well as being able to officiate at weddings, funerals and baptisms. She notes there has been “very positive feedback” with a number of priests saying they go regularly go to the website seeking inspiration for their homilies.

She sees the new project as responding to Pope Francis’ call for “more incisive presence of women in leadership in the Church.” It also grows out of her own experience of having three daughters, who, like many other Catholics, have rarely “seen or heard a woman preach”. “If you have a Corinthians notion of Church, the theology that we’ve all been given gifts for the greater good and for the Body of Christ” she asks, “why do we assume that only ordained men have been giving the gift of preaching?”

The new project is also an opportunity to rediscover some of the women in the Old and New Testament whose stories are rarely heard during the Mass. She points to the example of the words from St Paul’s letter to the Romans about “our sister Phoebe, a deacon of the Church,” noting that “you will not find Phoebe in the Catholic lectionary in years A, B or C.”

Donnelly explains that she tries to match the readings with the women most able to offer insights from their own ministry and experience. She notes that Dominican Sister Luma Khuder, who grew up outside the embattled Iraqi city of Mosul, will be offering a Good Friday reflection.

She also gives the example of Krisanne Vaillancourt Murphy, in charge of Catholic outreach for the ecumenical anti-hunger group, Bread for the World, who reflects on the readings for the 5th Sunday in Ordinary Time about sharing bread with the hungry. In this way, Donnelly says, the site seeks to link to these vital ministries “to share the good news about what women around the world are doing.”