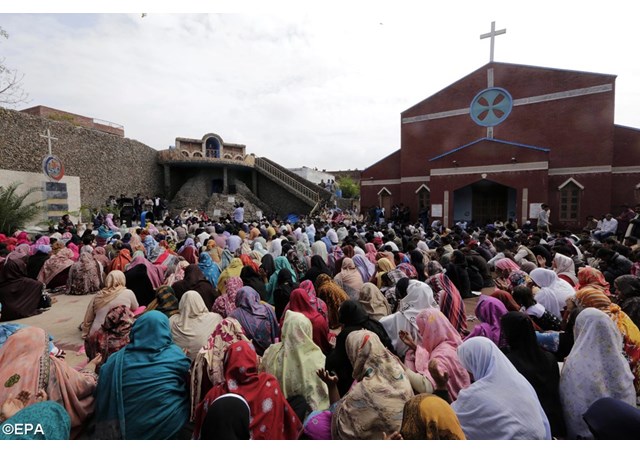 Pakistan’s Christians have condemned a public prosecutor’s reported offer to a group of Christians facing trial he would acquit them if they converted to Islam.  Nearly 60 Christians are on trial for the mob killing of two men mistaken for militants shortly after two terrorist suicide bombers blew themselves near St. John’s Catholic Church and Christ ‎Church of the Church of Pakistan,‎ in Youhanabad in Lahore on March 15, 2015.   The assault claimed 17 lives and injured more than 70.  ‎  More than 100 Christians were rounded up and put on trial after the lynching of the two.

The Centre for Legal Aid, Assistance and Settlement (CLAAS), an interdenominational organization ‎working for persecuted Christians in the country, said that Deputy District Public Prosecutor (DDPP) Syed Anees Shah offered ‎Christians acquittal if they agreed to convert to Islam.‎  ‎"How can we expect justice when people sitting in courts are inwardly biased? We demand that the ‎government takes action against the public prosecutor," Sohail Habel, a member of CLAAS told UCANEWS.  "In my 13 years of human rights activism, I have seen many such offers made to non-Muslim prisoners," ‎he said, adding that a CLAAS legal team was supporting the victims and trying to dissuade them from ‎capitulating.‎

Bishop Joseph Arshad of Faisalabad, who chairs the Catholic Bishop's National Commission for Justice ‎and Peace condemned "pressurizing" Christian prisoners.‎  ‎"Justice must be done according to the law. Nobody has authority to give such offers if they were really ‎made," he said.‎

The Express Tribune, a local English daily, quoted Prosecutor Syed Anees Shah saying that he did not ‎ask them to embrace Islam but conceded that he offered them a choice. When he was told that the ‎accused have recording of the offer, he disconnected the call.‎

Aftab Gill, information secretary of the Christian, Masiha Millat Party, condemned the offer. "I was ‎present at the court when the prosecutor made the offer. Several Christians confirmed receiving the ‎offer to embrace Islam in return for acquittal," he told UCANEWS.  ‎"We appeal to the Chief Justice of Supreme Court to pursue action against the prosecutor," he demanded.‎  ‎"We have full faith in our legal system and judiciary. But if such people are allowed to go unpunished, ‎vulnerable minorities will lose hope," Gill added.‎

Rev. Arshad Ashknaz of Christ Church of Youhanabad lamented the public prosecutor’s offer saying, “It is really bad to lead people astray.”  “This will give a bad image to the court and the whole legal fraternity,” he told AsiaNews.   In his view, “The public prosecutor can be sued for this prejudiced action. We plan to meet him soon. The government should reject this. Fear of death can force anyone to change religion”.

Forced conversion are not rare in Pakistan. The country’s human rights organizations estimate that about a thousand Hindu and Christian women are forced to convert to marry Muslim men each year.  According to the latest Report on religious minorities in Pakistan by the National Commission for Justice and Peace of the Catholic Bishops' Conference of Pakistan, five Christians converted to Islam in 2014, including three teenager girls who were abducted and forced into marriage.

Against the backdrop, Sindh last year became the first Pakistani province to pass a law against forced religious conversions. However, the provincial government was forced to go back on its decision to protect minorities after opposition from some religious scholars.

For Rev Ashknaz, “There is no religious freedom. The whole system supports Christian women who marry their Muslim spouses, but it is a torment for Christian men who do the same. Their families suffer and their houses are burnt”.

According to Christian lawyer and rights activist Nadeem Anthony, Asia Bibi, the Catholic mother on death row for the past seven years charged with blaspheming the Prophet Mohammad, was made a similar offer.  However, “My faith is alive and I will never convert”, she told him when they met at the Sheikhupura District Jail in 2010.  “This is a common practice. Even my Muslim friends asked me to do the same. Such impositions are expected in cases of religious persecution,” Anthony said.  (Source: UCAN/AsiaNews)