Vatican's message to Jains on the occasion of Mahavir Jayanti ‎ 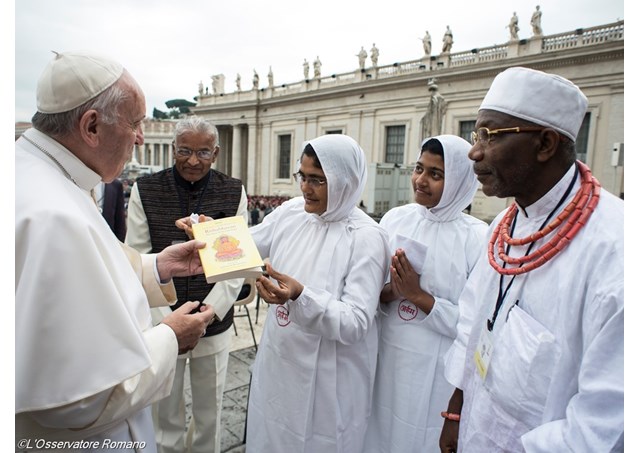 The Vatican has sent a message to Jains across the world wishing them on their most important festival and urging their collaboration to "foster non-violence in families to nurture peace in society.”

The Vatican’s Pontifical Council for Interreligious Dialogue offered its "warmest felicitations" on the occasion of the 2,615th birth anniversary of Tirthankar Vardhaman Mahavir, who gave Jainism its present-day form.  “May this festive event bring happiness and peace in your hearts, families and communities!‎” read the message signed by Council president, Cardinal Jean-Louis Tauran and secretary, Bishop Muguel Angel Ayuso Guixot.

The annual festival called Mahavir Jayanti, is the biggest in their calendar, and falls on April 9 this year. Mahavir is the 24th and last tirthankara (teacher) of the Jain religion, whose core tenet is non-violence and respect towards all living beings.

Jainism, born as a non-Brahminical religious movement in 6th century B.C. in India, has some 5 million ‎followers, mostly in India.  The religion’s three main principles are non-violence (ahimsa), non-absolutism and non-possessiveness.

Please find below the text of the message of the Pontifical Council for Interreligious Dialogue:

Christians and Jains: Together to foster practice of non-violence in families

The Pontifical Council for Interreligious Dialogue sends you its warmest felicitations as you celebrate the 2615th Birth Anniversary of Tirthankar Vardhaman Mahavir on 9th April, this year. May this festive event bring happiness and peace in your hearts, families and communities!

Violence, with its many and varied forms, has become a major concern in most parts of the world. So, we wish to share with you on this occasion a reflection on how we, both Christians and Jains, can foster non-violence in families to nurture peace in society.

Causes of violence are as complex and diverse as its manifestations. Not so infrequently, violence stems from unhealthy upbringings and dangerous indoctrinations. Today, in the face of growing violence in society, it is necessary that families become effective schools of civilization and make every effort to nurture the value of non-violence.

Non-violence is the concrete application in one’s life of the golden rule: ‘Do to others as you would like others do unto you’. It entails that we respect and treat the other, including the ‘different other’, as a person endowed with inherent human dignity and inalienable rights. Avoidance of harm to anyone in any way is, therefore, a corollary to our way of being and living as humans.

Unfortunately, refusal by some to accept the ‘other’ in general and the ‘different other’ in particular, mostly due to fear, ignorance, mistrust or sense of superiority, has generated an atmosphere of widespread intolerance and violence. This situation can be overcome “by countering it with more love, with more goodness.” (Pope Benedict XVI, Angelus, 18 February, 2008).

This ‘more’ requires a grace from above, so also a place to cultivate love and goodness. Family is a prime place where a counter culture of peace and nonviolence can find a fertile soil. It is here the children, led by the example of parents and elders, according to Pope Francis, “learn to communicate and to show concern for one another, and in which frictions and even conflicts have to be resolved not by force but by dialogue, respect, concern for the good of the other, mercy and forgiveness” (cf. Post-Synodal Apostolic Exhortation, Amoris Laetitia, 2016, nos.90-130). Only with persons of non-violence as members, can families greatly contribute to making non-violence truly a way of life in the society.

Both our religions give primacy to a life of love and non-violence. Jesus taught his followers to love even their enemies (cf. Lk 6:27) and by His eminent example of life inspired them to do likewise. Thus, for us Christians, “nonviolence is not merely a tactical behaviour but a person’s way of being” (Pope

Benedict XVI, Angelus, 18 February, 2008) based on love and truth. ‘Ahimsa’ for you Jains is the sheet-anchor of your religion - ‘Ahimsa paramo dharmah’ (non-violence is the supreme virtue or religion).

As believers rooted in our own religious convictions and as persons with shared values and with the sense of co-responsibility for the human family, may we, joining other believers and people of good will, do all that we can, individually and collectively, to shape families into ‘nurseries’ of non-violence

to build a humanity that cares for our common home and all its inhabitants!

Wish you all a happy feast of Mahavir Janma Kalyanak!