Pope appeals for protection for Iraqi civilians trapped in war 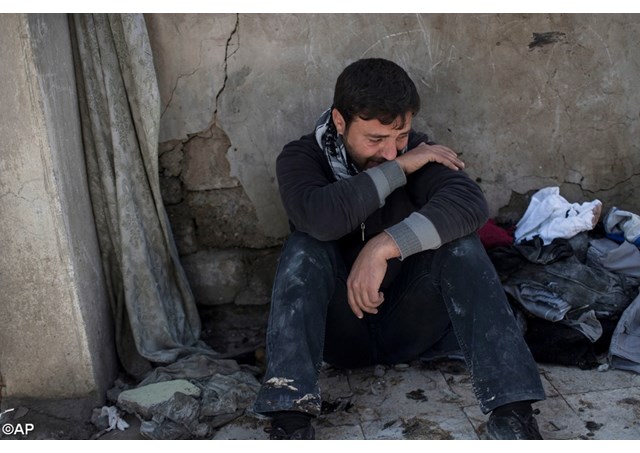 (Vatican Radio) Pope Francis has appealed for a concerted effort to protect Iraqi civilians who are victims of the ongoing bloody war in their nation and he prayed in particular for those who are trapped in the embattled city of Mosul.

Iraqi forces backed by US-led coalition air strikes are fighting to clear Islamic State militants from Iraq's second city where the coalition allegedly had a role in a March bombing which killed over 200 people..

The Pope’s appeal came at the end of his catechesis during the General Audience in St. Peter’s Square.

Expressing deep pain for the victims of the bloody conflict in Iraq, Pope Francis appealed to all to  make every possible effort to protect civilians, which he said is an  “imperative and urgent” obbligation.

Encouraging the Iraqi people to pursue a path of unity within respect for diversity, the Pope also asked for prayers for reconciliation and harmony between the different ethnic groups that make up the population.

In his catechesis the Pope encouraged Christians to always put their trust in God’s word, even at those times when hope seems humanly impossible.

Reflecting on St. Paul’s Letter to Romans in which he presents Abraham not only as our father in faith, but also as our father in hope, Francis said the reading helps us put the strong tie that exists between faith and hope into focus.

He said that hoping against hope, Abraham trusted in God’s promise that, despite his old age and that of Sarah his wife, he would become the father of many nations.

“Great hope, he said, is rooted in faith”, that’s why it is able to go beyond all human expectations.

“We must all pray to God, open our hearts and He will teach us what hope is” he said.

Reminding those present that  God promises to set us  free from sin and death by the power of Christ’s resurrection, Pope Francis urged the faithful to place their certainties not so much in their own capacities, but in the hope that derives from God’s promise of life.

Faith, he said, teaches us, to hope against hope by putting our own trust in God’s word even at those times when hope seems humanly impossible.

The Pope concluded urging believers to be confirmed in faith and hope during this Lenten journey to Easter, and to accept the promise of new life given us in the Lord’s resurrection.