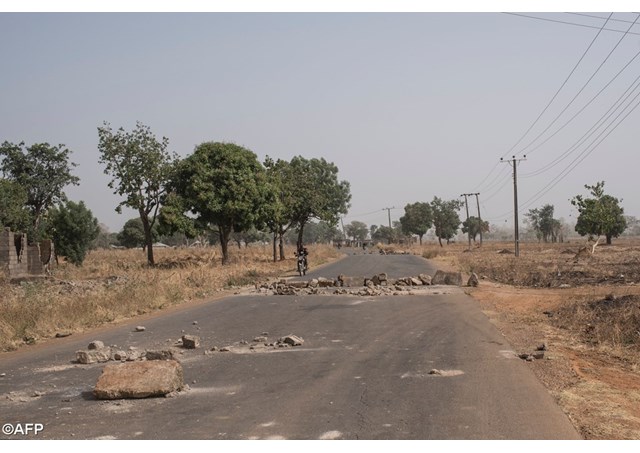 The Catholic Bishop of Kafanchan Diocese, Joseph Bagobiri, has called for an effective synergy by all Christian denominations in the country to counter the systematic elimination of Christianity in the northern part of the country.

Bishop Bagobiri made the call when he received an official delegation of the Catholic Bishops’ Conference of Nigeria (CBCN) which visited him in Kafanchan. The delegation was in the diocese to commiserate with him; the entire Catholic faithful and the Christian community of southern Kaduna on the recent atrocities of Fulani Cattle herdsmen in the area, which resulted in the deaths of thousands of Christians and the destruction of property worth millions of Naira.

The delegation was led by the Archbishop of Jos and President of the Bishops’ Conference, Ignatius Kaigama. Archbishop Kaigama was accompanied on the visit by Fr. Ralph Madu, Secretary General of Catholic Secretariat of Nigeria (CSN); Fr. Zacharia Samjumi, CSN Deputy Secretary General and Fr. Chris N. Anyanwu, the Director of Social Communications at the Secretariat.

The delegation was also in Kafanchan in the words of Archbishop Kaigama, “To see you since you came back from your medical trip abroad.” He added, “We are happy that you are fairly OK now and that you are responding to treatment. It is our prayer that God will renew your energy and grant you total healing.”

According to Bishop Bagobiri, Christians of Southern Kaduna have taken their case to God in prayer. They want God to fight their battle for them because He is the only one who can rescue them from the systematic elimination of Christians in the area which has the support of both the Federal and State governments as well as the country’ security agents.

In his words, “Since we have no government that would listen to our plight, we have carried our case directly to God. It is only God that can save us from our present situation. Our hope in Him is never in vain since he knows our problem and He will deliver us one day just as he delivered the people of Israel from the hands of the Egyptians,” Bishop Bagobiri said.

Bishop Bagobiri disclosed that the challenges for the survival of Christianity in northern Nigeria are premised on structural injustices which have become institutionalised, especially in southern Kaduna. He, therefore, advocated that the Church evolve new ways to enable the faithful stand for their faith in the face of persecution. The Bishop itemised some of the injustices to include inequitable distribution of amenities, infrastructure and discrimination in appointment to political and public office.

“We have greater challenges on how Christianity can survive in Northern Nigerian especially in Southern Kaduna because of the structural injustices that are institutionalised,” The Bishop outlined.

He added, “We as a Church must evolve new ways on how we can face violence without losing faith. It is our prayer that God will give us strength and the needed direction on how to make Christianity survive despite the constant attacks and persecution.”

In his remarks on how to counter structural injustices which have been identified as some of the root causes of conflict in northern Nigeria, the CBCN President, Archbishop Ignatius Kaigama made a few suggestions.

“First and foremost, we must continually 'make noise' and bring to the fore the structural injustices embedded in the system of government," he said.

He added, “Secondly, we must use Constitutional means to fight for our rights. Where it becomes necessary, we must go to court and use human rights lawyers that are sympathetic to the course of justice; not only as a Church but also as citizens of this country.”