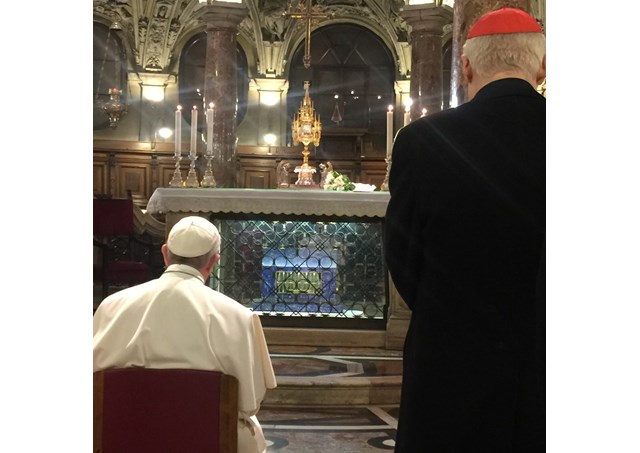 (Vatican Radio) Pope Francis on Saturday is making a one day pastoral visit to Milan. This morning he paid a call on Milan’s Duomo and traveled to the peripheries of the city to meet with immigrant families.

For the curious pilgrim or tourist a trip to Milan is not complete without a visit the “Duomo” or Cathedral Church. And it was here in front of this iconic building that Pope Francis recited the Angelus on Saturday greeted by thousands of well- wishers.

A short time earlier inside this magnificent building, the Pope met with priests and consecrated persons, listening to their questions and offering words of advice. During the question and answer session the Holy Father said that in a world that is multicultural, multi-religious, and multi-ethnic,  the Church, over its entire history, has had much to teach us and to help us towards a culture of diversity. The Holy Spirit, Pope Francis noted “is the master of diversity.” The Pope also underlined the importance of prayer and of service in the church; service by priests, religious and consecrated to the poor and to the Word of God.

Responding to a question from a religious mother who asked how it was possible to continue to be a significant presence today despite being fewer and older, the Pope said, that it was most important not to become resigned to one’s fate. He said that realities today were a challenge, but religious orders who were in the minority were being invited to rise again like yeast with the help of the Holy Spirit, who also inspired the hearts of their founders.

This one day pastoral visit began on Saturday morning with the Holy Father’s going out to Milan’s peripheries to meet with Rom, Islamic, and immigrant families of the ‘White Houses’ in the Forlanini quarter of the city. Greeting the crowds of people that had gathered to see him, he told them that the Church “always needs to be restored” because he added, it is made by us, who are sinners.” Let us be restored, he said by God’s mercy.