Pope’s Mass in Monza: ‘A people at the peripheries’ 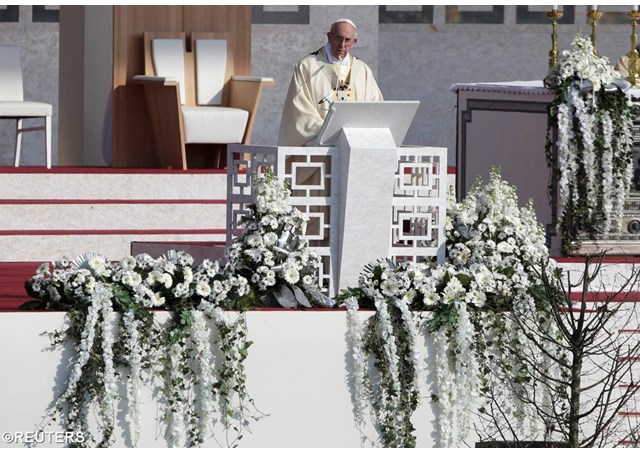 (Vatican Radio)  Pope Francis celebrated Holy Mass in Monza Park for the people of the Archdiocese of Milan, Italy on Saturday during a pastoral visit, reflecting on the annunciation of Jesus as a message of joy at the peripheries of society.

The Holy Father invited them to be joyful members of God’s people and to avoid “speculating” on the future of others.

Two were the questions Pope Francis put to the people gathered for Mass in Monza Park: “How can we live the joy of the Gospel today within our cities? Is Christian hope possible in this situation, here and now?”

The Holy Father said these two questions “touch our identities” and “require of us a new way of seeing our place in history”.

He was reflecting on the difference between the two annunciation stories in the first chapter of Luke’s Gospel: that of John the Baptist (Lc 1,26-38), which took place in the inner sanctuary of the Temple in Jerusalem, and that of Jesus (Lc 1,5-10).

He said the annunciation of Jesus’ birth to Mary by the Angel Gabriel took place in Galilee: “a peripheral city with a less-than-excellent reputation (Jn 1,46)”.

The Pope said the contrast indicates that “God’s new encounter with His people will take place in places we would not normally expect: on the margins and peripheries”.

He said, “It is God Himself who takes the initiative and chooses to enter – as Mary did – in our houses and daily struggles, full of anxiety and desires.”

Pope Francis said finding joy in our daily lives can be a challenge due to the speculation or taking advantage of others.

“Some people speculate on life, on work, and on the family. They speculate on the poor and migrants, on young people and their future. Everything seems to be reduced to numbers, on the other hand leaving the daily life of families to be discolored by precariousness and insecurity.”

The keys to finding joy in our mission, the Pope said, are “memory, belonging, and seeing the possible in the impossible”.

“The first thing the Angel [Gabriel] does is evoke her memory, in this way opening Mary’s present to the whole of Salvation History. He evokes the promises made to David as a fruit of the Covenant with Jacob. Mary is a daughter of the Covenant.”

This memory, the Holy Father said, allows Mary to recognize her belonging to the People of God.

He said the Archdiocese of Milan is inhabited by “a people called to welcome differences and integrate them with respect and creativity, celebrating the newness offered by others. It is a people unafraid of embracing borders.”

Third, Pope Francis reminded Milan’s pilgrims that “Nothing is impossible for God” (Lc 1,37).

In conclusion, the Pope said, “As before, God continues to seek allies and men and women capable of believing and capable of remembering, recognizing themselves as belonging to His people in order to cooperate with the creativity of the Holy Spirit.”