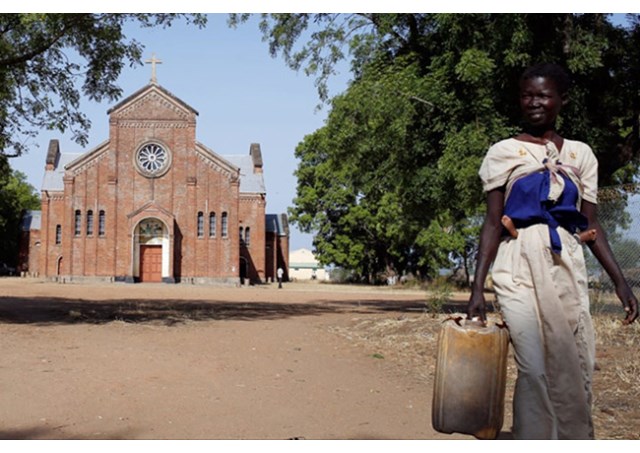 (Vatican Radio) Thousands of vulnerable South Sudanese are at imminent risk of death from hunger and lack of medicines.

A worsening crisis in the world’s youngest nation sees a famine being declared in the midst of civil war.

Caritas Internationalis and other aid agencies say that currently 1 million people in South Sudan are in imminent danger of famine and in total 5.1 million are in urgent need of food and livelihood help. At least 270,000 children are suffering acute malnutrition.

They are warning that if large-scale aid of food and medicines does not arrive before the imminent rainy season there are going to be a lot more deaths very soon.

Bishop Erkolano Lodu Tombe, President of Caritas South Sudan and Bishop of Yei, is in Rome for a high level Caritas Internationalis meeting that aims to plan a scaling-up of the emergency response in an enhanced cooperation across all Caritas agencies in the region.

Speaking to Vatican Radio’s Linda Bordoni, Bishop Lodu Tombe appealed to all people of goodwill not to close their eyes and their hearts to the suffering of the people of South Sudan.

Bishop Lodu Tombe speaks of the current high-level Caritas Internationalis meeting which had in fact been scheduled quite some time ago with the aimed of building stronger ties between local Caritas offices that support the development of South Sudan which became independent in 2011.

“The meeting has been overtaken by other issues: the situation of famine which is now raging in South Sudan – even the government – has declared a famine : we are speaking of almost 5 million people facing starvation” he said.

So, the bishop continues, it has been decided to “raise our voice so that those who have the heart to listen to the cry of the people who are hungry, who are dying” may perhaps, within their own possibilities, offer help.

Bishop Ludu Tombe says the cause of the famine which is now affecting the people so seriously is “man-made” in the sense that it is a consequence of war which reignited in July 2013 in Juba and spread to many parts of the country.

The government, he says, is facing rebellion in several parts of South Sudan, particularly in Equatoria State, “it is a cause for displacement, for destruction of villages, for the burning of huts, for famine, because the people – as those in the Yei area for example – are unable to harvest their crops”.

The lack of security, Bishop Lodu Tombe, explains has prevented farmers not only from harvesting last season’s crops but also from sowing for the next season, and this is catastrophic.

The bishop also speaks of a serious and dangerous situation deriving from the fact that many roads are blocked for security reasons.

For example, he says, Yei Town is isolated – no one can enter (including humanitarian workers with food and medicine) or exit  the city – and there are over 100,000 people trapped there.

Also the situation outside the town is catastrophic, he says, because whole communities are without access to aid, to clean drinking water, to education for their children.

“Whether they are inside the town or outside, the situation is catastrophic: it is a situation of war” he said.

The bishop also speaks of his concern that much of the violence is being perpetrated by government forces against civilians.

“The government’s army seems to be fighting the people” he said.

He explains that when armed groups attack government soldiers in the garrisons and then flee, the response of the army on the civilian population is disproportionate and innocent people end up suffering the consequences and bearing the brunt of the situation.

“People are killed, villages are burnt, and sometimes those who are killed are burnt in the huts “he said.

In their recent pastoral letter the South Sudanese bishops describe the ‘deafening silence’ in which the crisis is unfolding.

The bishop says the Church is the only party that has been giving voice to the suffering people in the face of famine as far back as last August.

“It was the strong voice of the Church that attracted humanitarian people to come to Yei, for example, by air, to see the truth of what was happening” he said.

He said even the government was keeping silent until very recently.

Bishop Ludu Tombe says Pope Francis’s appeals to take notice of South Sudan – to start doing something – have opened the ears of many who many who previously did not hear.

“The voice of the Holy Father has made many understand that the situation in South Sudan is dramatic” he said.

He speaks of the deep meaning a visit by Pope Francis would have should it be possible for the Holy Father to visit if the security situation allows.

He said a visit  is planned perhaps for October in the company of the Archbishop of Canterbury, “it would be a very important visit to bring hope and courage to all the people of South Sudan, not just to the Christians”.

“Everybody would like to see this great religious leader of the Catholic Church (…) it would be a great support and would give strength to the people of South Sudan who are people of religion” he said.

Lodu Tombe says the only credible voice for the people of South Sudan  for many years has been the voice of the Church, and the presence of the Holy Father would be further proof of this.

The Holy Father’s presence, he said, would confirm that “what we are doing is worth doing” and would give incredible strength to the local Church, to the bishops, to the priests the catechists and so on.

Bishop Lodu Tombe concludes with a heartfelt appeal to all men and women of goodwill to help provide humanitarian assistance to those dying of hunger.

“We cannot wait too long. Rainy seasons are about to start, and if humanitarian aid is not taken to the people now during the dry season, it will be impossible to deliver when the roads are closed, blocked by water” he said.

So, he said, anybody who wants to help, please hurry up and do so by supporting Caritas Internationalis that will raise support for the local Caritas offices.

“Any person of goodwill, any human being who has the good of humans in their heart, should not close eyes and heart to the suffering of the people; especially in Europe where people have televisions and other means of communication and have seen pictures of people suffering in South Sudan: let them not just remain ‘seeing’ what is happening; DO something to help the dying people survive and to give them back their dignity so they can live like human beings and not in a miserable situation like animals”.