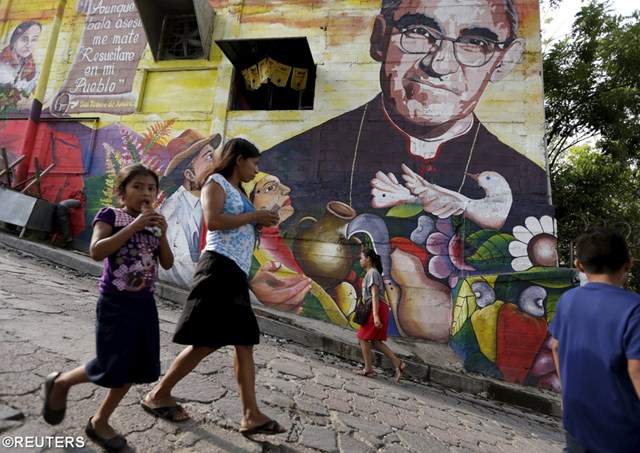 (Vatican Radio) March 24th marks the feast day of the former Archbishop of San Salvador, Blessed Oscar Romero and the 37th anniversary of his assassination by hired gunmen at the height of El Salvador’s civil war.

2017 also marks the centenary of Romero’s birth, an event which is being marked in his native country by a special anniversary year. Throughout Latin America and in countries around the world, his life and legacy is also being celebrated  through liturgies, pilgrimages, study days and commemorative lectures.

Among those organizing activities for this feast day in the UK is Julian Filochowski, head of the London-based Romero Trust. He told Philippa Hitchen why he expects this year’s events to have a particular significance

Julian Filochowski explaind that the Blessed Oscar Romero was born on the feast of the assumption on the 15th of August in 1917, so this year, 2017 we celebrate the centenary of his birth which falls two years after his beatification that took place in San Salvador in May 2015.

So hearfelt is this celebration, he says the Diocese of San Salvador has proclaimed  a Jubilee year, and there are events all over the country and other parts of the world.

In Britain a special service at St. George Cathedral is taking place and foresees the precence of  Archbishop Vincenzo Paglia, postulator of Romero’s cause.

Filochowski said that in September, a major ecumenical service in scheduled to take place in Westminster Abbey to mark the centenary in the presence of the former Archbishop of Canterbury, Rowan Williams and of  the Cardinal of Westminster Vincent Nichols.

He said a special anthem, composed by Scottish composer James MacMillan, will make its debut at that ecumenical service.

“The year has become particularly exciting in the sense that we have great hopes that it will be the year of Oscar Romero’s canonization” he said.

Why is the canonization imminent, given that he was only beatified in 2015?

“Thereafter, the process moving towards canonization normally would take more than a year, but if, as we believe, Pope Francis very much wants to see this canonization happen during the centenary year” he said.

Filochowski pointed out that should the Pope make it a top priority “then the Congregation for the causes of Saints that deals with the matter will make it their top priority. In which case, as with Pope Saint John Paul II and  Mother Theresa of Calcutta, the matter could be expedited in a matter of months, and we might therefore see at least the announcement if not the actual canonization during this centenary year, which is our hope and our fervent prayer.”

Connection between Romero and the UK, Southwark in particular

Filochowski explained that there is a strong connection between Romero and the UK: “ There is a shrine in St. George’s Cathedral in London which has with a huge painted, Salvadoran cross, three-dimensional and included a fragment of the blood-stained habit that Bishop Romero was wearing when he was murdered. This has been in place for the past four years”.

He said devotion to Romero has been around in London and Southwark for a long time, and the Congregation for Divine Worship has agreed that the Cathedral can celebrate the Romero feast day.

Filochowski also spoke of the ecumenical dimension of Romero’s outreach and of how he has been very much embraced by Anglican community as well as Catholics.

He said on the night Romero was killed, Robert Runcie was being installed as Archbishop of Canterbury in Canterbury Cathedral: “The links and parallels between Thomas Becket killed in that Cathedral and Romero shot dead in the middle of Mass in San Salvador were very powerful, and as a result, there’s been a very great connection.”

Filochowski concluded saying that Westminster Abbey has a statue of Romero over the West Doors, can almost be described  as an “Anglican canonization”.