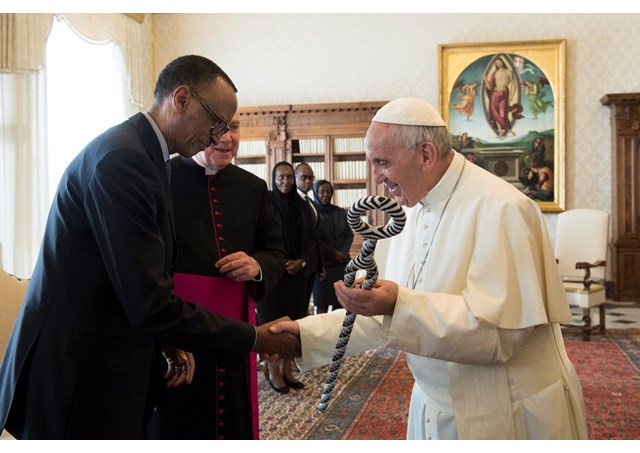 (Vatican Radio)  Pope Francis received the President of the Republic of Rwanda, Paul Kagame, in a private audience at the Vatican’s Apostolic Palace on Monday.

President Kagame and his entourage subsequently met with Cardinal Pietro Parolin, Secretary of State, who was accompanied by Archbishop Paul R. Gallagher, Secretary for Relations with States.

A communique from the Holy See Press Office said their discussions were cordial:

“During the cordial exchanges, the good relations that exist between the Holy See and Rwanda were recalled. Appreciation was expressed for the notable path of recovery towards the social, political and economic stabilization of the country. Likewise noted was the collaboration between the State and the local Church in the work of national reconciliation and in the consolidation of peace, for the benefit of the whole Nation.”

Pope Francis, it went on, “conveyed his profound sadness, and that of the Holy See and of the Church, for the genocide against the Tutsi. He expressed his solidarity with the victims and with those who continue to suffer the consequences of those tragic events and, evoking the gesture of Pope St John Paul II during the Great Jubilee of the Year 2000, he implored anew God’s forgiveness for the sins and failings of the Church and its members, among whom priests, and religious men and women who succumbed to hatred and violence, betraying their own evangelical mission.”

“In light of the recent Holy Year of Mercy and of the Statement published by the Rwandan Bishops at its conclusion, the Pope also expressed the desire that this humble recognition of the failings of that period, which, unfortunately, disfigured the face of the Church, may contribute to a ‘purification of memory’ and may promote, in hope and renewed trust, a future of peace, witnessing to the concrete possibility of living and working together, once the dignity of the human person and the common good are put at the centre.”

The Pope and the President then exchanged views “about the political, social and regional situation, with attention to those places that are suffering conflicts and natural calamities. A particular concern was expressed for the large number of refugees and migrants in need of help and support from the international community and from regional structures.”