South Sudan: the role of the Church and its Action Plan for Peace 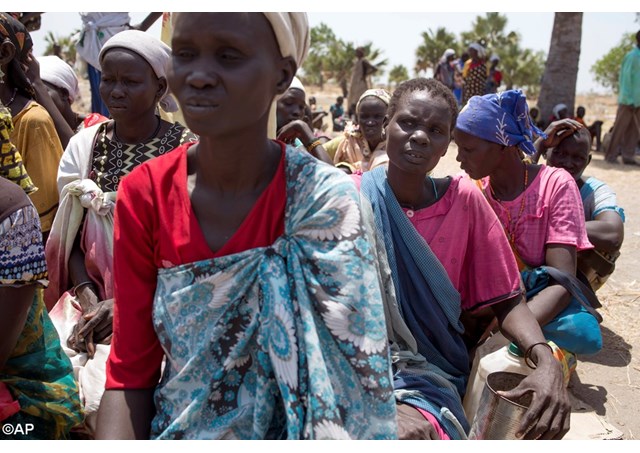 (Vatican Radio)  South Sudan's President Salva Kiir called for a National Day of Prayer for peace and forgiveness on 10 March and urged citizens to turn out in high numbers.

Renewed political tensions and violent clashes between government forces and the opposition have resulted in tens of thousands of vulnerable people fleeing their homes and their lands. A famine was recently declared in some states, and an estimated 7.5 million people are in need of humanitarian assistance.

Meanwhile Pope Francis has said he is studying the possibility of an ecumenical visit to war-torn South Sudan together with the leader of the Anglican Church, Archbishop Justin Welby.

On the ground, Churches of different denominations including the Catholic and Anglican Churches - which count the largest followings - are urging the people to put aside differences and commit to dialogue on nation building.

Father Michael Perry, Minister General of the Order of the Friars Minor has just returned from the South Sudanese capital Juba. He spoke to Linda Bordoni about the impact a visit by the Pope would have and explains that the Church-driven process for peacebuilding and reconciliation is firmly rooted in Sudanese soil.

“I think we are at a moment right now where people are certainly confronting life and death, they’re confronting hope and despair” Fr Michael Perry OFM said.

He speaks of the resilience of the South Sudanese of all religious affiliations, a resilience that is severely put to test, and of how they are still hopeful and how they are praying for a visit by the Pope at this time.

Perry highlights the importance a joint visit with the Archbishop of Canterbury would have because it would offer  “the ecumenical witness to demonstrate that we can live together even although we have differences and that we don’t necessarily share the same ethnic roots and the identical religious convictions. It would be a tremendous witness and sign of hope and an invitation to all leaders and to all people involved who have the possibility to construct a nation, for peace, a moment in which to stop and take account of what’s going on”.

The Minister General explains that the Churches in South Sudan have had an ongoing relationship since the 1960s.

It’s a relationship, he says, that has gone through different phases and ups and downs, which at this moment, is strong.

Perry says that together, the Churches in the nation have come up with an Action Plan for Peace which has three components to it:

-    Creating neutral spaces for dialogue in which local communities can come together, talk about and begin to deal with the trauma they are undergoing in terms of conflict, displacement, famine, climate change, and then to shed the light of faith on that trauma so that they recognize they are not alone.

-    Advocacy: to try to take the message of what is coming out of these dialogues that are searching for peace and reconciliation at the local level to ‘recreate humanity’; and then to take the main points of that process and present them at an international level so that appropriate measures can be taken to help the government achieve what it has promised to do in the Constitution and what is renewed through the different processes of peace.

-    That all of this may contribute to the groundswell of desire for peace and reconciliation among the people.

Perry points out that the South Sudanese government has welcomed the Church’s Action Plan for Peace, but has also come up with its own plan for reconciliation: a National Dialogue that will be a bottom-top approach - starting within the communities and taken to the national level. So, he said, the Church’s plan is a reinforcement and an accompaniment of the government’s effort for peace building.

“One of the beliefs being that the Church leaders, at the local levels, are the ones who have tremendous contact, and in general, because of their long-standing relationship, and because of the nature of the Sudanese  being a faith community, there’s a trust level that is there that creates the possibility of going deeper” he said.

Perry said that one of the traits of the history of Sudan and of South Sudan, as far back as the conflict in 1960, is the presence of men of the Church in accompanying peace making and trying to build trust.

“People of the Church were there praying with the communities, accompanying those involved in the struggle at times, praying for a peaceful solution, working for justice and searching for the conditions to bring about a permanent peace” he said.

He said the role of the Church was absolutely essential in the lead-up to 2011 and the founding of the new nation.

Even on an international level, he stressed, the Church in the United States, for example, was present throughout the whole peace process with ecumenical partners and deep involvement.

Perry also speaks of the work the United Nations is doing on the ground and about how it is searching to respond to the crisis, to encourage the government and everyone on the ground to try and stabilize the situation and to eventually help the people to return to their homes and to their lives, although he points out, climate change is currently having a huge impact on the crisis situation as well.

He talks of how the deeply religious people of South Sudan  are resilient and continue to be hopeful but of how they are now prey of what he calls “existential exhaustion” deriving from the endless difficulties they continue to face as “every time they have to run they lose everything”.

It is a moment, he said, in which “every effort must be made to arrive at a sustainable peace that is just, that is human, that gives dignity to people and that will guarantee the rights for all people to participate in this new experiment which is South Sudan.”