Voices of Faith: Women must be at the heart of Church's life 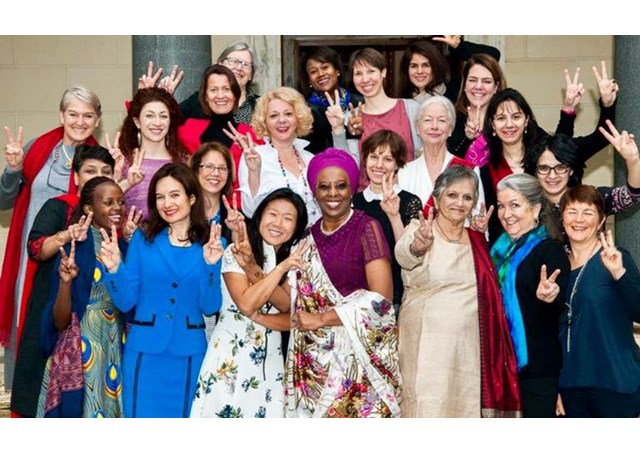 (Vatican Radio) We must must be honest and admit that the full participation of women in the life of the Church "remains stymied on many fronts". Those were the words of the Jesuit Superior General, Fr Arturo Sosa, at the opening of the 2017 Voices of Faith event in the Vatican on Wednesday.

The annual event marking international women’s day brought together voices of Catholic women from around the globe with the theme ‘Stirring the waters: making the impossible possible’.

Noting that faith provides the audacity to strive for the’ impossible’, Fr Sosa spoke of the resilience and courage he has witnessed firsthand among women working on the border between Colombia and his native Venezuela.

He said while Pope Francis’ efforts to bring Vatican II to life and focus on the needs of the poor have opened the way for women’s voices to be better heard, we must acknowledge that their gifts have not yet been fully recognized.

The co-president of Pax Christi International, Marie Dennis, endorsed Fr Sosa's view in her closing remarks at the conference. She said the full participation of women is central to the Church’s promotion of active non-violence, as spelt out by Pope Francis in his message for World Peace Day in January this year.

Voices of Faith 2017: Women at the Heart of Nonviolence

Almost a year ago, 85 people from around the world gathered here in Rome for what has been called a “landmark” conference on nonviolence and just peace. Invited by the Pontifical Council for Justice and Peace and Pax Christi International, participants came together to imagine a new framework for Catholic teaching on war and peace that could help the world move beyond perpetual violence and war. Central to our conversation were the voices of people promoting active nonviolence in the midst of horrific violence and among them, the voices of women.

Many participants came from countries that have been at war or dealing with serious violence for decades: Iraq, Sri Lanka, Colombia, South Sudan, the DR Congo, Mexico, Afghanistan, Palestine, El Salvador, the Philippines, Northern Ireland, Lebanon, Burundi, Guatemala and more. Their testimony was extremely powerful.

Iraqi Dominican Sister Nazik Matty whose community was expelled from Mosul by ISIS said, “We can’t respond to violence with worse violence. In order to kill five violent men, we have to create 10 violent men to kill them.... It’s like a dragon with seven heads. You cut one and two others come up.”

Ogarit Younan, who co-founded the Academic University for Nonviolence and Human Rights in Lebanon, shared her positive experience of equipping youth, educators and community leaders throughout the Middle East with nonviolent skills to end vicious cycles of violence and discrimination.

Jesuit Francisco DeRoux told the story of Alma Rosa Jaramillo, a courageous woman, an audacious lawyer, who had joined their team in the Magdalena Medio region of Colombia to support displaced small farmers. She was kidnapped by the National Liberation Army, the ELN, and finally released. Then she was captured by the paramilitaries. “When we managed to recover Alma Rosa,” Francisco told us, “she was lying in the mud, dead; they had cut off her arms and legs, with a chainsaw.” Immediately, another women stepped in to take her place, as did Alma Rosa’s son, Jesus – and the team continued to talk with the guerrillas, the paramilitaries and the army, searching for a nonviolent solution a war that had gone on for 50 years. Over and over again they heard from campesinos, native people, afrocolombians – people whose youngsters had joined the guerrilla groups, the paramilitary groups and the army: "Stop the war, stop the war now, and stop the war from all sides!"

Gathered in Rome we heard similar stories from many of the conference participants - courageous people in local communities living with unimaginable danger who said … stop the militarization, stop the bombing, stop the proliferation of weapons - rely on nonviolent strategies to transform conflict.

Together during the conference we wrote an Appeal to the Catholic Church to Re-commit to the Centrality of Gospel Nonviolence, urging the Church to move beyond the language of “just war” that has been central to Catholic theology on war and peace for centuries and to “integrate Gospel nonviolence explicitly into the life, including the sacramental life, and work of the Church through dioceses, parishes, agencies, schools, universities, seminaries, religious orders, voluntary associations, and others.”  We asked Pope Francis to write his World Day of Peace message, and someday an encyclical, on nonviolence.

Obviously, we were delighted with his 2017 World Day of Peace message on “Nonviolence A Style of Politics for Peace.”

But central to the Church’s process of studying and promoting active nonviolence must be the full participation of women:

* women who are theologians to help develop a new moral framework for Catholic social thought on war and peace, a rich theology of nonviolence, and excellent exegesis around the nonviolence of Jesus;

* women in politics and social sciences to help articulate effective nonviolent strategies to use in a dangerous world;

* grassroots women to design nonviolent practices that can in fact protect vulnerable communities;

* women in Catholic schools, Catholic universities, seminaries and parishes who can teach nonviolence;

* women who will bring Catholic values to the public debate on the use (or not) of violent force close to home or on the other side of the world;

* women who will insist that resources be devoted to meeting basic human needs and protecting the integrity of the natural world, not building more weapons for war;

* women who will help the world shape a just and sustainable peace that responds to the real needs of our families and local communities; and on and on.

What if … Catholics were formed from the beginning of life to understand and appreciate the power of active nonviolence and the connection of nonviolence to the heart of the Gospel – trained to understand the implications in the 21st century of love your enemy?

What if the Catholic Church committed its vast spiritual, intellectual and financial resources to developing a new moral framework and language for discerning ways to prevent atrocities, to protect people and the planet in a dangerous world?

What if women were central to articulating and implementing this shift in Catholic understanding of and commitment to nonviolence and just peace?

For Christians, nonviolence is a way of life, a positive and powerful force for social change, and a means of building a global community committed to the well-being of all. Active nonviolence is a multilayered approach that is fundamental to the teaching of Jesus and recognises the humanity of every person, even our sons and daughters who are perpetrators of terrible violence. It is a process for ending violence without lethal force, for transforming conflict, and for protecting the vulnerable. It is a process that women own in the depths of our souls.

Now more than ever it is time to put active nonviolence into practice in our own neighborhoods and around the world.

No one knows how to do this better than the women in any society and so Voices of Faith today honors women: makers of peace and promoters of active nonviolence in a troubled world.