Pope: Lent is a time to start breathing again 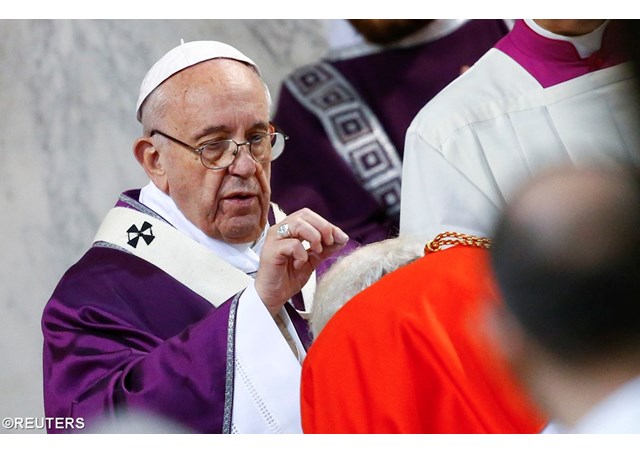 (Vatican Radio) Continuing a long-standing tradition, Pope Francis celebrated the Holy Mass for Ash Wednesday at the Basilica of Santa Sabina on the Aventine hill in Rome.

The Holy Father began his homily for the beginning of Lent with the words of the prophet Joel, from the first Reading: “Return to me with all your heart… Return to the Lord.” These words, the Pope said, apply to everyone, and exclude no one; “we all want to return to the merciful heart of the Father.”

Lent, the Pope said, is a path that “leads to the triumph of mercy over all that would crush us or reduce us to something unworthy of our dignity as God’s children.” The mark of ashes, received during the ceremony, reminds us of our origins, that we are dust – but, he said, it also reminds us that God breathed life into each of us. “The breath of God’s life,” he said, “saves us from this asphyxia that dampens our faith, cools our charity, and strangles every hope”

Pope Francis said Lent is a time for saying no: no to “spiritual asphyxia” caused by indifference; no to “the toxic pollution of empty and meaningless words”; no to “a prayer that soothes our conscience, an almsgiving that leaves us self-satisfied, a fasting that makes us feel good”, no to all forms of exclusion.”

But Lent is also a time for remembering, a time “to reflect and ask ourselves what we would be if God had closed His doors to us.” It is a time, too, the Pope said, to ask where we would be without so many people who have helped us along our journey.

And so, Pope Francis concluded, “Lent is a time to start breathing again… the time to open our hearts to the breath of the One capable of turning our dust to humanity.”