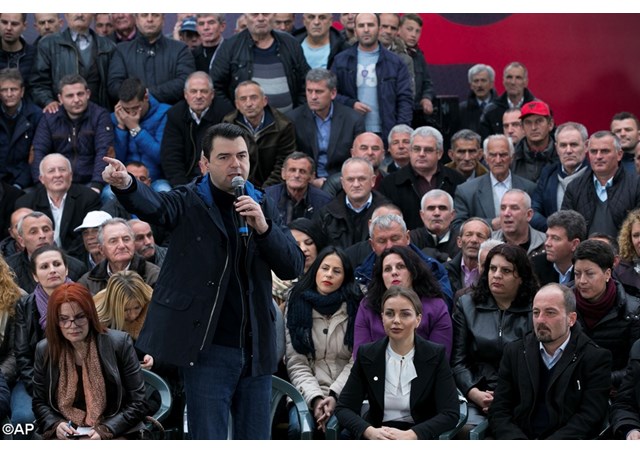 (Vatican Radio) Calls for the Albanian prime minister Edi Rama to step down have continued ahead of elections slated to take place on June 18.

Listen to the report by correspondent Nathan Morley in Tirana:

Hundreds of protestors gathered again in the blazing sunshine in front of the main government offices in Tirana, demanding change.

The leader of Albania's main opposition Democratic Party, Lulzim Basha, made an appearance at the rally on Monday telling correspondent Nathan Morley that he defended his decision to boycott parliament, which is causing delays to much-needed judicial reforms required by EU.

"This is now a republic run by crime and drugs”, Basha said.

Existing judges and prosecutors are being vetted due to a lack of confidence in the legal establishment. Observers argue that a more credible legal system is vital to securing greater foreign investment and trust both at home and abroad.

Basha was charged with inciting violence last week after calling "on citizens to react violently against state institutions."

If found guilty; he could spend up-to three years behind bars.

This tiny Balkan country of 3 million people has been a candidate to join the EU since 2014 – and is hopeful of launching accession negotiations this year.