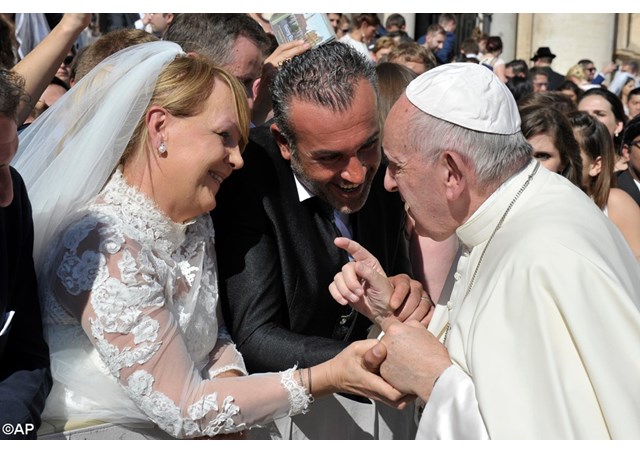 On Saturday morning in the Vatican, Pope Francis met with parish priests participating in a training course dealing with annulment procedures and other legal issues surrounding marriage.

The course was organized by the Roman Rota, the highest appellate tribunal of the Church.

Referring to the proposals of the Synod of Bishops on “Marriage and the Family”, and his subsequent Apostolic Exhortation, “Amoris Laetitia”, the Pope praised this study initiative saying it  is the parish priest who is in daily contact with families and is called to concretely apply the  appropriate juridical norms.

In most cases, said the Pope, the parish priest is the first to whom young people turn when they decide to marry and create a new family. And again, it is to the parish priest that couples come when their marriage is in crisis and they need to rediscover the Grace of the Sacrament of Matrimony.

No one knows better than you do, he told the priests, the complexity and variety of problems that exist in marriage: Christian unions, civil marriages, broken marriages, families and young people who are happy or unhappy.

“You are called to be a travel companion to every person in every situation, to support and to give witness”, said the Pope.

First and foremost you are called to witness to the Grace of the Sacrament of Matrimony and the good of the Family as the vital heart of the Church and society, by proclaiming that marriage between a man and a woman is a sign of the union between Christ and His Church. Pope Francis went on to say how God and His Love are reflected in the Sacrament of Marriage – which he described as “an icon of God”.

At the same time, the parish priest is called to support those who have come to realise that their union is not a true sacramental marriage and want to correct this situation. In this delicate and necessary moment make sure your faithful see you as a brother who listens and understands, rather than an expert in bureaucracy and juridical norms, he said.

Pope Francis invited parish priest to pay special attention to those young people who prefer to live together rather than get married. “Spiritually and morally-speaking,” he said, ”they are among the poor and little ones towards whom the Church wants to be a Mother who never abandons, but is close to them and takes care of them…So be tender and compassionate towards them”.

Finally, the Pope reminded those present of his speech to the Roman Rota on January 21st in which he called for a new teaching style in preparing couples for matrimony, one that follows each step of their sacramental journey, from the wedding itself to the first years of marriage.

“I encourage you to put this teaching into practice”, he said, “despite the difficulties you may encounter.”