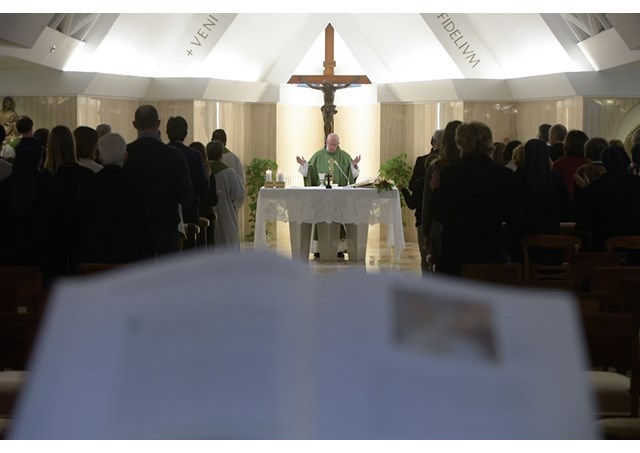 (Vatican Radio) “May the Lord give us the grace of ‘holy shame’ before the temptation of ambition.” That was Pope Francis’ message at daily Mass in the Casa Santa Marta on Tuesday, saying that the one who wants to be the first must be last and the servant of all.

Pope Francis began his homily at daily Mass noting that “We will all be tempted.” He drew inspiration from the First Reading, which recalls that whoever wishes to serve the Lord must prepare for temptations, and the Gospel reading, in which Jesus tells his disciples of his impending death.

The disciples do not understand why Jesus has told them of his coming death but are too afraid to ask what he means. This, the Pope said, is “the temptation to not complete the mission”. He said even Jesus suffered this temptation.

The day’s Gospel also mentioned another temptation, that of ambition. The disciples argue along the way about who among them was the greatest, but remain silent when Jesus asks them what they are discussing. The Holy Father said they do not respond because they are ashamed of their words:

“These were good people, who wanted to follow and serve the Lord. But they did not realize that the path of service to the Lord was not an easy one. It wasn’t like becoming part of a group, some charitable group doing good: No, it was something else. They were afraid of this. It happened, happens, and will happen. Let us think about infighting in a parish: ‘I want to be the president of this association, in order to climb the ladder. Who is the greatest here? Who is the greatest in this parish? No, I am the most important here; not that person there because he did something…’ And that is the chain of sin.”

Pope Francis also gave other examples of this temptation which brings one to “speak poorly of another” and to “climb the ladder”.

“Sometimes we priests say ashamedly within our presbyteries: ‘I want that parish… But the Lord is here… But I want that one…’ It is the same. It isn’t the way of the Lord but the path of vanity, of worldliness. The same occurs even among us bishops: worldliness comes as a temptation. Many times [it is said]: ‘I am in this diocese but look at how important that one is’ and I try to influence someone, or put pressure, to get somewhere…”

Therefore, Pope Francis exhorted his audience to always ask the Lord for “the grace to be ashamed when we find ourselves in these situations”.

Holy shame against the temptation to worldliness: ‘We are unworthy servants’

Jesus, he said, overturns this logic. Sitting among his disciples he reminds them that “if someone wishes to be first, they shall be last and the servant of all”. Jesus then takes a child and places it in their midst, telling them “Whoever receives one child such as this in my name, receives me; and whoever receives me, receives not me but the One who sent me.”

The Pope asked his audience to pray for the Church, “for all of us” so that the Lord may defend us “from ambitions and from the worldliness of wishing to be greater than others”.

“May the Lord give us the grace of shame, of holy shame, when we find ourselves in that situation of temptation and to be ashamed: ‘But am I able to think such a thing? When I see my Lord on the cross and I would want to use the Lord to climb the ladder? And may God give us the grace of the simplicity of a child. I imagine a final question: ‘Lord, I have served you all my life. I have been the last all my life. And now what? What does the Lord say? Tell yourself: ‘I am an unworthy servant.’”