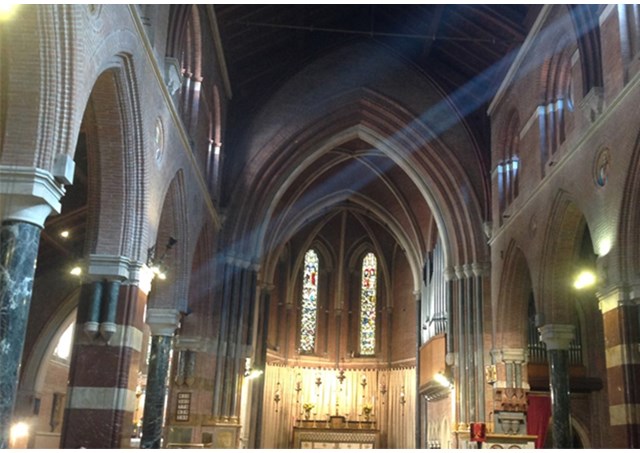 (Vatican Radio) Pope Francis’ historic visit to the Anglican church of All Saints in central Rome on Sunday will be marked by the ‘twinning’ of the Church of England community with the Catholic parish of Ognissanti on the south side of the city.

The Pope’s visit comes as part of celebrations for the 200th anniversary of the first Church of England Eucharist, which took place in the so-called ‘English ghetto’ near the Spanish steps on October 27th 1816. He will be the first pope to visit an Anglican Church in his own Diocese of Rome.

Members of All Saints and Ognissanti have worked together informally for almost a decade, attending each other’s liturgical celebrations and providing services to the hungry and homeless. The Catholic parish of Ognissanti on the Via Appia Nuova is the titular church of Cardinal Walter Kasper, former president of the Pontifical Council for Promoting Christian Unity. It's also the place where Pope Paul VI celebrated the first Mass in Italian in March 1965, following the liturgical reforms of the Second Vatican Council.

Cardinal Kasper spoke to Philippa Hitchen about the pastoral outreach of his parish and about the importance of Sunday’s papal visit to All Saints..

Cardinal Kasper says the Pope’s visit to All Saints’ community is a further step marking “the growing of our relationship”: Pope Francis presence as the Bishop of Rome, he says, is “very significant”. Noting that he is the titular cardinal of the Catholic parish of Ognissanti, twinned with All Saints, he says “for me it's a very joyful event” which will help to further those ecumenical relations.

These relations, the cardinal continues, don't just grow through theological dialogue, even though that is important, but also through personal contact and especially by praying together. He notes that Jesus did not “make an imperative to have unity” but rather he “prayed that all may be one” and ecumenism, he says, is the “sharing of this prayer of Our Lord”

Sunday’s liturgy will include a renewal of baptismal vows and Cardinal Kasper stresses that being “baptized together in the same Lord Jesus Christ” is the foundation of the ecumenical movement.  Today, he says, all baptized Christians “have to stand together and give common witness” against violence and terrorism, seeking to promote justice and peace and learning that “what we have in common is more than what divides us”.

Ognissanti, the cardinal notes, is a very lively parish which is engaged in much pastoral work and open to the challenges facing all Christians today. It has worked especially with the migrant community, including the provision of rooms for women migrants who have come to Rome needing a place to stay.