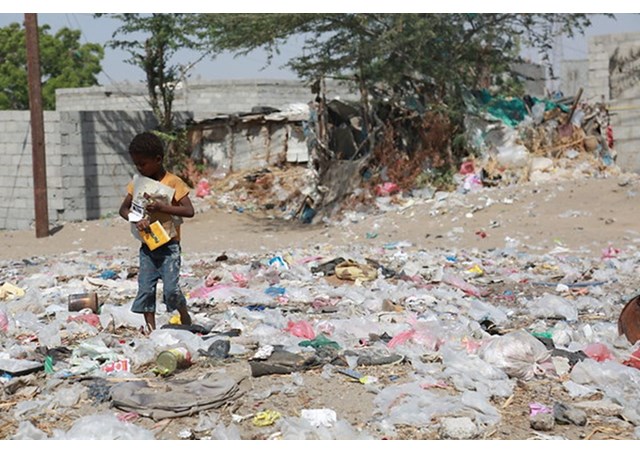 (Vatican Radio) The ongoing conflict in Yemen was singled out by Pope Francis during his speech to Vatican diplomats at the beginning of the year.

Speaking of the need to support processes of dialogue and emphasizing the need for courageous gestures he called on international actors to foster reconciliation in Yemen, one of the Arab world's poorest countries which continues to be devastated by a war between forces loyal to the internationally-recognized government of President Abdrabbuh Mansour Hadi and those allied to the Houthi rebel movement.

Almost 7,000 people have been killed and more than 35,000 injured since March 2015, the majority in air strikes by a Saudi-led multinational coalition that backs the President.

The conflict and a blockade imposed by the coalition have also triggered a humanitarian disaster, leaving 80% of the population in need of aid.

Since the conflict escalated over 17 million Yemenis suffer from food insecurity, while more than 460,000 children face immediate risk of death from malnutrition and lack of medical care.

Linda Bordoni spoke to Alvhild Stromme, media advisor for the Norwegian Refugee Council that has teams in the country providing assistance to those in need:

Alvhild Stromme says that since the beginning of the conflict the humanitarian situation has precipitated month by month: “what we see now is almost the complete collapse of the economy”.

She explains that it has become practically impossible for the private sector to get anything into the country and while the airport is closed, it is difficult for people to get out, even for medical reasons.

“This is a country that even before the conflict escalated in March 2015, it was the poorest country in the region. Already then, there were millions of people depending on some kind of assistance and 90% of the food that people needed was imported from outside” she said.

Stromme notes that when you have a disruption of the imports, in addition to damage to the infrastructure within the country – for example to hospitals, schools, roads, ports, and bridges “you can just imagine the impact that this has on an already very poor population”.

Asked whether the people who are at such a point of food insecurity they possibly fear hunger more than they fear bombs, Stromme says it is difficult to ascertain.

“Of course dying from hunger is a slow, painful and quiet death; while you can count the victims that are killed by bombs or airstrikes. It’s more difficult to count the number of people who die from illnesses or starvation” she said.

She pointed out that children, who are the most vulnerable, are bearing the brunt of the situation with hundreds of thousands dying of starvation, a predicament also connected to the fact that there are limited medical facilities and huge difficulties in getting medical supplies into the country.

“The scale of this crisis is enormous. In this country where you have 27 million people, there are 17 million who need more food, and for many of these, the situation is very severe” she said.

Stromme says the Norwegian Refugee Council is on the ground trying to get support to where it is most needed, and although it is very challenging it is not a completely hopeless situation.

“Just last year NRC reached 1.2 million people in Yemen with some kind of humanitarian assistance, including water, food and education” she said.

She expresses her hope that the world opens its eyes to the suffering of the people in Yemen and provides humanitarian agencies that are in the country with the financial resources required.

She says that earlier this month a humanitarian team led by the UN put forward a plan on how to reach as many people as possible.

“They are asking for 2.1 billion US dollars to reach 12 million people” she said.

Stromme also pointed out that the process of getting food and medical supplies into the country by private actors can be carried out more smoothly, so that the economy in Yemen can recover.

She invites anyone who would like to contribute to go to the NRC website which provides people with various options for action.

Stromme speaks of the importance of Pope Francis’ call against a globalization of indifference and calls on everyone to help raise awareness, even within their own community, school or workplace.

“Keep remembering the plight of the people in Yemen, she said, research what is going on, get information, and together we can try to raise awareness about the suffering of people in Yemen which is the worst humanitarian crisis unfolding at this time in the world”.